First, a disclaimer: The community meeting to talk about issues related to events in Ferguson, MO, held last night at Eau Claire High School, was organized by the Greater Columbia Community Relations Council, with heavy involvement by the office of Mayor Steve Benjamin. I am a member of the Council, and co-chair of the Community Affairs Committee. Despite that, I was not involved in organizing this event. I will, however, likely be involved in any followup activities undertaken by the Council.

Whew, I’m out of breath after typing all of that.

Anyway, you probably saw coverage of the event in The State today. I have little to add to that coverage, beyond a few subjective impressions.

In general, the event was what you might expect it to be — a venue for people in positions authority to carefully state their concern and show their willingness to listen, and for folks whose passions are stirred by events in Ferguson to vent. On those bases, I judge it a success. I particularly commend CRC Executive Director Henri Baskins, who acted as MC with poise, fairness and calm confidence.

On the first part of that equation, I was impressed by the panelists, but most of all by new police Chief Skip Holbrook. It was the first chance I’ve had to observe him in such an environment, and he did well. Better than that — I think he may well be the steady hand that the city has needed in that job. 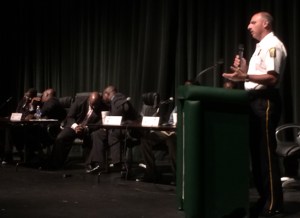 As the one white man on the stage, and the only panelist in a police uniform, he was a natural object of scrutiny, given the topic. He did an excellent job of explaining the ways that his department works to prevent situations such as those in Ferguson, and I think it went over well. His demeanor was perfect — he stood up for his department, but did so in a disarming manner. His high point: When he told the assembly, near the end, that he was a better police chief for having been there. That sort of thing could come across as corny or manipulative, but it didn’t from him.

There was some tension in the room, which I’ll encapsulate with this anecdote: At one point former U.S. Attorney and SLED director Reggie Lloyd made the observation that after the fatal shooting in Ferguson, the local officials did exactly “the right thing.” Immediately, a woman’s voice pierced the calm with a high-piping “What?!?!” He went on to explain that the right thing Ferguson officials did was turn the investigation over to outside authorities. He noted that there is an FBI investigation under way, and said approvingly that no one should expect to hear a word about that investigation until it is completed. His implication was that ours is a society with processes for dealing with such situations, even though they may not be satisfying to everyone’s emotions. In fact, he expressly urged people to separate their emotions from their own processing of the event.

Similarly, Municipal Judge Carl Solomon spoke of the importance of young people knowing their rights… but used that as a segue to say they needed to understand their responsibilities as well (I was hearing a lot of good communitarian stuff like that). Among one’s responsibilities, in interactions with police, is to remain “calm and be polite.” He suggested that a respectful demeanor gets you a lot farther than an aggressive assertion of “I know my rights!” in an interaction with the law.

Against those evocations of reason, the event included some venting of emotions. One could expect nothing else from the woman whose son was shot multiple times by police last year. And there were the usual would-be revolutionaries, such as the red-shirted young man who kept going on about how slavery still existed in these United States (because the 13th Amendment, as we all know, allows for involuntary servitude “as a punishment for crime whereof the party shall have been duly convicted”), and asserted how proud he was of the protesters in Ferguson, because he believed otherwise this discussion would not have taken place.

Then there was the young lady who protested that there were only two “young people” on the panel, suggesting that it was somehow illegitimate for the panel to consist mostly of accomplished people with positions of responsibility in the community. This drew a few cheers from like-minded folks in the crowd.

But everyone involved deserves credit for exhibiting their emotions, as well as their reasoning, in a calm, civilized and constructive manner.

And on that basis, as I said before, I regard the event as a success. Because the ultimate goal is to learn to deal with each other and resolve our differences with civility rather than violence — is it not? 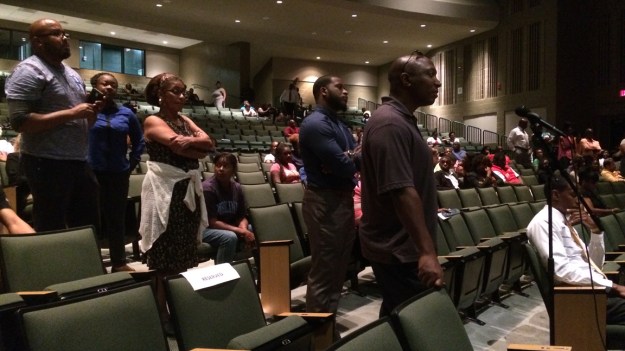 Even as the crowd thinned, folks were still lined up for a turn at the microphone.