This morning, as usual, I parked my car in a metered space along the median on Assembly Street, just north of Gervais. As I got out, I almost stepped on the pictured item.

When I first saw it, it was on its side with the hollow bottom was pointed toward me, and I thought it was a particularly heavy-duty thimble. Which was odd enough. 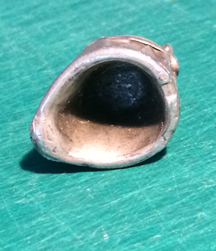 But then I picked it up, and I don’t know what it is.

The round thingy on top makes it look like a charm for a charm bracelet. But it’s way too heavy for that. A woman with seven or eight of these dangling from her wrist would find ordinary use of her hand rather tiring.

As you see, it’s shaped like a helmet of some kind. Like a cross between those worn by a “Star Wars” storm trooper, Iron Man and those guys dressed as ancient hoplites who were wandering about the Greek Festival over the weekend, posing for pictures with the public.

It seems to be made out of pewter. And as I said, it’s heavier than it looks.

It must be of value to somebody. I debated whether to leave it there on the pavement, or bring it with me and publicize on the blog that I had it. This way seemed slightly more likely as a means of getting it back to its owner.

But before I give it back, I need you to satisfy my curiosity by telling me what on Earth it is…

5 thoughts on “What IS this thing I found on the street today?”