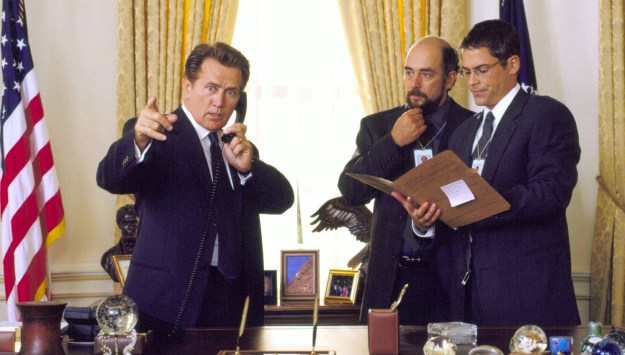 Once, he was so young and vigorous.

As I was working out this morning, Leo McGarry — now Matt Santos’ running mate — was sweating over debate prep, and Josh and the rest of the campaign were leaking how badly he was doing, to lower expectations.

One by one, President Jed Bartlet’s key staffers have pulled away. Sam Seaborn just sort of fell off the face of the Earth when he went West to run for Congress (the way he faded away, without any mention of what happened to him, is one of the few weaknesses in the writing of the show). Leo stepped down after his heart attack, but is now “jumping off the cliff” again with Santos. Josh is running the Santos campaign. Toby is — well, you know what happened to Toby — and if you don’t, I’m not telling you.

The Bartlet administration is winding down. This was episode 10 of the 7th and final season. Only 12 episodes left.

And if you think the presidency of Barack Obama has aged him, have you ever compared pictures of Jed Bartlet from season one and season seven? Being a TV president can be pretty rough, too, apparently.

Of course, the transformation is more startling to me than it was to folks who watched the show the first time around. I saw my first episode at the start of this year.

As you know, I have loved this show. I don’t want to lose it, and have to go back to the horrible real-life politics. Or to vastly inferior television, for that matter. I try to cling to it. I get excited when someone else out there writes about how much he or she loved the show, and I nod enthusiastically. When a young woman asserted in the WashPost that “I’m the biggest ‘West Wing’ fan you’ll ever meet,” I protested, “No, you’re not.”

Getting slurred, incoherent phone calls to do with Scotland and the referendum. Someone please confiscate John Marbury’s mobile phone.

All this fanboy behavior is pitiful, I know, but then my plight is truly pitiable: I’m about to run out of West Wings. And I fear there’s nothing out there that I haven’t seen that is as good as this. 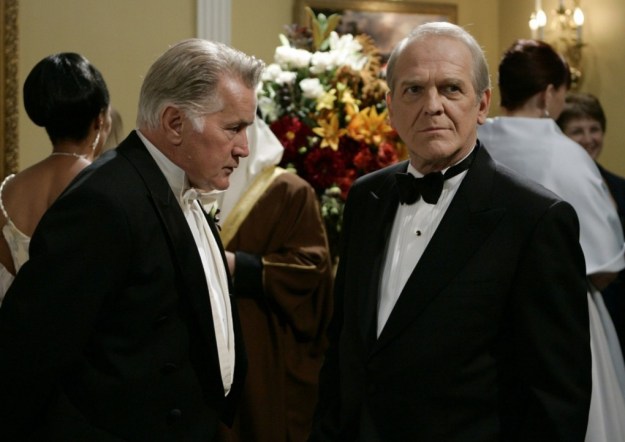 Showing his age, with Leo in Season 7.

7 thoughts on “You ever notice how much Jed Bartlet aged in office?”