Politico notes that more and more newspapers are announcing that they’ll no longer do candidate endorsements.

And as usual with such cop-outs, their excuses for this are completely lame:

Papers in Michigan, Wisconsin, Maine and Texas have all announced this year that their editorial boards will no longer print the traditional candidate endorsements.

The Green Bay Press-Gazette said they are discontinuing the practice in order to be “an independent voice amid the growing clamor of voices espousing hyper-partisan views.”

It’s a trend that’s been spreading throughout the country, CJR reports. In 2012, the Halifax Media chain said they would stop endorsing ” because endorsing candidates could “create the idea we are not able to fairly cover political races.” The Chicago Sun-Times and the Atlanta Journal-Constitution have also ceased endorsing candidates.

Guess what? People will still accuse you of not fairly covering political races. As has always been the case and always will be the case, people will try to read a bias into every word you write. They will always be looking for an indication that you’re really for the other guy, and in their minds, they will find the proof in every news story.

That’s why, as an institution, you should be honest about any preference you do have. So at least readers can take that institutional preference into consideration in assessing the fairness of your coverage. It makes you more transparent, rather than forcing readers to guess about the biases that they assume you have.

Fortunately, there are still some editors out there who understand what newspapers, and especially editorial pages, are for. As CJR reports:

As for movement in the other direction? The Los Angeles Times, which gave up endorsements in presidential campaigns after 1972, in part because of conflict over its support for Richard Nixon, returned to the practice in 2008. The Times’ reasoning tracked pretty closely with the Chicago Tribune’s 2012 statement on why it plans to keep endorsing: Editorial boards take stands on political issues every day, and it would be odd or even irresponsible to go silent at such a key moment.

Amen to that. I’ve said the same many times: Every day of every year, newspapers publish their opinions on every policy issue under the sun — which is a fine thing in theory, but the fact is that in a representative democracy, a newspaper’s readers can’t do anything about most of those issues. The one time they all get a say is at election time, when they choose the people who actually will act on those issues.

To opine about these issues the rest of the time (and if you don’t think newspapers should express opinions at all, then that’s another issue for another day), and then fail to point out which candidates are most likely to enact the policies one favors, at the critical moment when readers all have a decision to make, is both lazy and cowardly.

Cowardice has always been a factor because close to half of the people reading any endorsement are going to get mad at you about it. So has laziness, as endorsements are labor-intensive. The “lazy” factor is playing a bigger and bigger role as newspaper staffs keep shrinking. 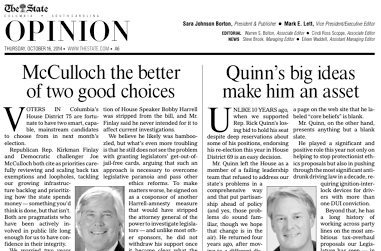 4 thoughts on “More newspapers have stopped doing endorsements, and their excuses for this cop-out are as lame as ever”