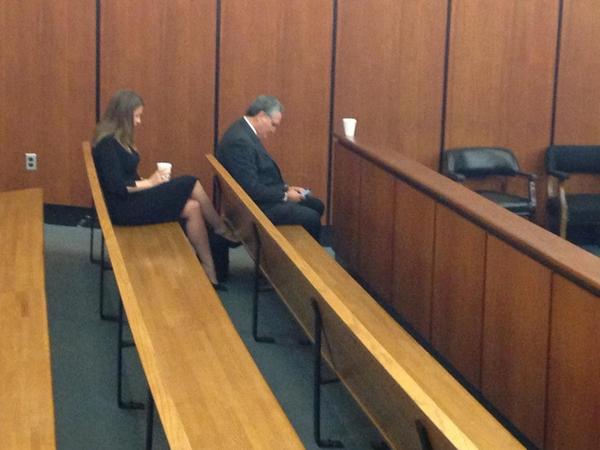 Carolyn Callahan of WIS Tweeted this just before the hearing, showing the isolated ex-speaker in the courtroom. Hope she doesn’t mind my sharing it here…

There’s a country song in there somewhere.

The man who was arguably the most powerful person in state government, boasting only a few weeks ago about how the attorney general had failed to bring him down, pleaded guilty today to six counts against him, and still has other charges hanging over his head. The terms, as reported by John Monk:

In a plea hearing at the Richland County courthouse, Harrell was given six one-year prison sentences but all were suspended by circuit court Judge Casey Manning after Harrell, 58, agreed to the following conditions in a written plea agreement:

• Harrell agrees not to seek or hold public office for three years. He also will be on probation during that time. The Charleston Republican was first elected to the House in 1993.

• Harrell will pay a $30,000 fine plus an additional $93,958 to the general fund of South Carolina. Harrell will also turn over all of his remaining campaign account to the state’s general fund. That amount was not immediately available.

• Harrell agrees to cooperate with state and federal prosecutors, including being ready to testify “fully and truthfully at any trials or other proceeding” in state or federal court. Harrell must submit to polygraph examinations….

Here’s perhaps the most interesting part:

In getting Harrell’s cooperation to be a potential government witness, prosecutor Pascoe agreed to “nol pros,” or not prosecute four other indictments against Harrell. However, under a written plea agreement, Pascoe reserves the right to re-activate the indictments and prosecute Harrell if the former speaker lies to law enforcement officials.

Such written plea agreements – in which lighter sentences are given, and some charges are dropped, in return for a criminal’s information about other potential crimes involving other people – are common in federal criminal court. In federal court, defendants also agree to submit to lie detector tests and they know that dropped charges can be brought again if the government catches the defendant in a lie…

So it looks like prosecutors pretty much have Bobby Harrell on a leash for the foreseeable future. How the mighty have… well, you know the rest. But who foresaw it happening so quickly and dramatically in this case?

26 thoughts on “Prosecutors really had Harrell over a barrel”