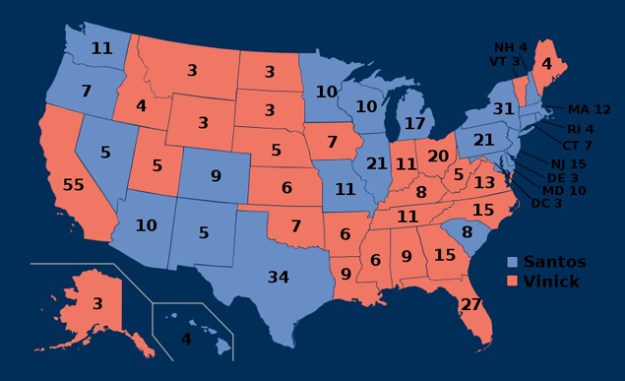 I mean, aside from it being about a fictional election.

Yes, I’m still obsessing about the absurdity of Democrat Matt Santos winning South Carolina in the seventh season of “The West Wing.” I don’t care that none of y’all were interested enough to comment on it yesterday. I’m interested enough for all of us.

During my workout this morning, in “Election Day Part II,” I learned one more supposed reason why the Democratic presidential nominee won SC (in addition to the two I mentioned yesterday, neither of which was convincing): It was mentioned (by the opposition) that Santos had spent so much time in SC, he could have been living here.

Well, that certainly would have been a departure from what we’re used to seeing — a Democratic presidential nominee actually visiting South Carolina.

But I don’t think it would make the difference. It would take a lot more than that, which is why Democratic presidential nominees don’t come to South Carolina during the general campaign.

I’m with Josh Lyman, who understood that there was something wrong if his guy was losing Vermont, but winning SC. He sort of freaked out about it, and who could blame him? His writers had put him in an impossible situation. Would Aaron Sorkin (who did not write these later episodes) have done that? I don’t think so.

Look at the map above. The Democrat lost California, but won SC? Mind you, there were extraordinary reasons for this. First, it was Vinick‘s home state. Second, Leo’s death was announced with another hour of voting to go in California. OK, fine — but if West Coast voters were balking at Santos because of Leo, then how did he win Oregon and Washington state?

You can see at a glance how SC sticks out like a sore thumb in blue. The Democrat would win Virginia or North Carolina or Florida way before winning here. It just doesn’t add up…

19 thoughts on “Quick: What’s wrong with this electoral map?”