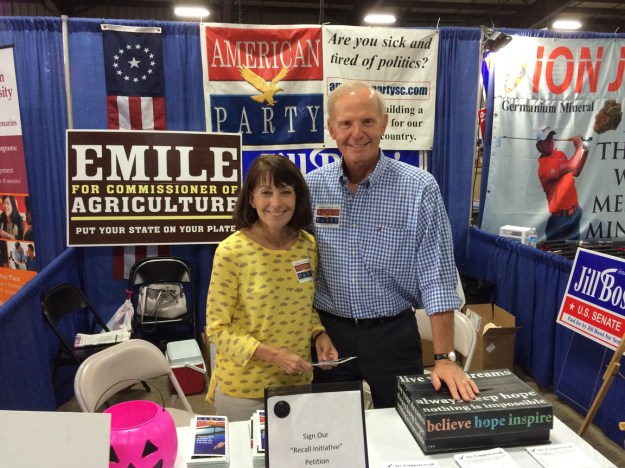 Sue and Jim Rex, at the American Party booth at the SC State Fair.

I went to the fair today, and saw the usual booths for the Democrats and Republicans, and stayed away from them.

But I stopped to chat at the American Party booth, because one of the founders of the party was there — Jim Rex.

Jim invited me to sign the petition to get a recall power onto the ballot — a measure that would allow voters to dump politicians who have broken the law.

I told him no, I don’t hold with recall petitions. I think elections come soon enough. Although I admit that allowing recall only in cases of illegality is a lot less objectionable than the kind they have in California and other places, which allow voters to dump pols between election on a whim if they choose (thereby eliminating even the rare glimpses of political courage that we occasionally see in non-election years).

Then, we segued into a polite argument about term limits, with me getting on a rhetorical high horse and saying I just have more simple faith in politics than he does. I trust the voters to decide for themselves whether they want somebody for one term, two terms, three terms or 20 terms.

I said that if he wanted to do something about cynical incumbents, noncompetitive elections and apathy, then go to work on a federal constitutional amendment that would end the way we apportion districts in this country. THAT is the cause of all the ills he deplores.

Anyway, looking at the picture I took above of the Rexes causes me to check myself — I shouldn’t have said I have more faith in politics.

There is no greater faith in our system than stepping out and starting a new party, and sticking to it and working as hard at it as the Rexes have, along with Oscar Lovelace and others.

Frankly, I find it inspiring, even when I disagree on policy proposals…

4 thoughts on “Showing a noble, inspiring faith in the possibility of politics”