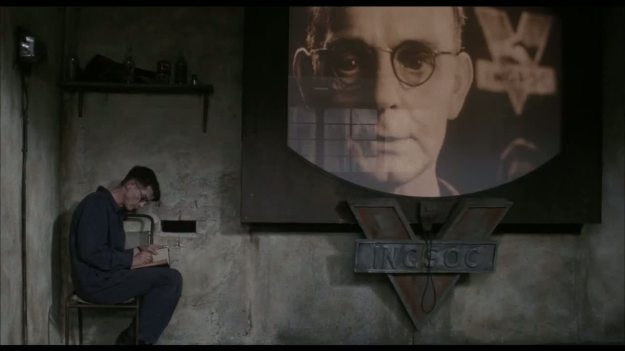 Off in my corner, out of sight of the telescreen, writing down my subversive thoughts…

Back on my post last night expressing horror at the number of South Carolinians (49 percent!) who voted straight-party on Tuesday, Lynn T. posted this thoughtful comment, to which I responded, and I thought the exchange was worth its own post. Lynn’s comment:

The parties have successfully sold the idea that they stand for a consistent set of values and priorities. Anyone who watches actual votes and decisions knows better, but few citizens do. First we have to set aside the cases in which consistency isn’t a reasonable goal because pragmatic lawmaking requires compromises. Even excluding those cases, the variation is substantial. One Democratic senator campaigned on his 100% rating from the Chamber of Commerce, normally more closely associated with the Republican Party. At the same time, his environmental record was not nearly as positive as that of some Republicans, who are usually perceived as more inclined toward business than environmental preservation. There are Republicans who support no-excuse early voting without adding “poison pill” restrictions, and others who take a very different direction. The diminished resources of the press in this state are a serious problem because the press is the closest thing we have to a reality check. If The State had as many reporters on the State House as on Gamecock football it would be fabulous. But then if more citizens cared about their government as much as they do about Gamecock football, it would be fabulous.

What the parties — and the media, and interest groups, and practically everyone whose profession has to do with politics — have successfully sold is the binary paradigm.

Almost all of the people who write or talk about, or otherwise deal with politics for a living, talk about political decision as being a choice between two options, and two options only. Either-or. Left-right. Democrat-Republican. Black-white.

And because that’s the way THEY talk and write about it, the rest of the public does the same. Why? Because they lack the vocabulary to speak or think about politics any other way. It’s a very Orwellian situation. The point of Newspeak in 1984 is to eliminate all words that express concepts that would free people’s minds. If they don’t have words for a concept that would be a thoughtcrime, they can’t engage in crimethink.

Too many people just can’t think beyond the notion that good people like me vote THIS way, and only this way, and that people who vote that other way are bad.

The way rank and file voters react to Nikki Haley offers a good example of this phenomenon. Among in-the-know Republicans — the Inner Party members, carrying forward the 1984 analogy — have never liked her much, although I sense a lot of them have now warmed to her.

But among the great masses of people who think of themselves as Republicans, if you criticize Nikki Haley, then you are a liberal Democrat. This, to them, is a truth that cannot be disputed. There can be no other explanation for your criticism.

I know this from personal experience. I actually have missed out on getting a job because the boss was convinced I was “left of center.” Why? Because I’ve criticized Nikki Haley. That was the entire explanation. I didn’t know whether to laugh or cry. But I knew I’d have trouble working for someone who didn’t think any more clearly that that, so sour grapes.

Cindi Scoppe and I both got that a lot over the years. And the idea that either of us is a liberal Democrat is risible to anyone who looks and listens and thinks. But otherwise bright people who don’t think about this stuff all the time believe it as a matter of course, because their paradigm admits no other explanation.

Back when Jim Hodges and Bill Clinton were in office, we caught similar hell from Democrats. Their notion that we were right-wingers was equally laughable, but you couldn’t convince THEM of that. (I’ll never forget one through-the-looking-glass experience I had speaking to a small group of academics back when Hodges was in office. They sat there with these stony looks of hostility on their faces. They finally let me know that, because I was opposed to Hodges and his “education lottery,” I was an enemy of public education — despite the fact that we had written FAR more over the years as champions of the schools than we had written about Hodges and his plan. They could not be moved. They sat there and informed me I had never lifted a finger for education. They were adamant in their absurd belief.)

As you say, Lynn, “Anyone who watches actual votes and decisions knows better, but few citizens do.” Posts such as this one are part of my campaign to gradually wear away at the bars of the average citizen’s mind prison, which was largely created by my colleagues in the media…