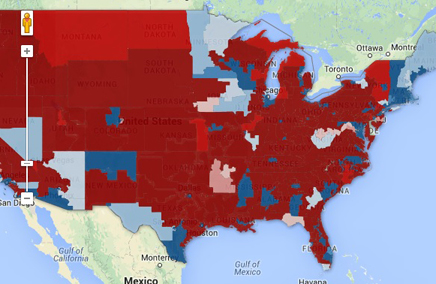 Click on the map above to go to a page where you can interact with it, and explore just how few House districts across the nation are competitive. It’s accompanied by various other charts that show graphically just how stacked the deck is across the country.

The dark red and dark blue districts are settled, foregone conclusions, thanks to the awful miracle of modern redistricting algorithms, which enable Legislatures to draw districts so that they are guaranteed to go for one party or the other — so that the only real contests are in primaries, which have the effect of pulling both parties farther and farther from the political center. The only thing most members of Congress fear is primary opponents who are more extreme than they are.

Of course, we know that there is no chance for the minority party in any of South Carolina’s seven congressional districts. That’s because ever since the redrawing that occurred after the 1990 census, the 6th District has been drawn as a super-extreme “majority-minority” district. I remember Jim Clyburn saying, way back in the 90s, that he didn’t really need his district to be gerrymandered to the extent that it was in order to win. Well, since then, if anything, our GOP Legislature has been even more generous with the state’s one Democratic congressman.

Why? because every black voter they can shove into Clyburn’s district makes the other six districts that much safer for Republicans.

This is, after all, how they came to power in the Legislature to start with. Black Democrats were unsatisfied with the number of majority-minority districts Speaker Bob Sheheen and the other white Democrats were willing to draw after the 1990 census. So they joined forces with the Republicans to pass a plan that created more of them — and consequently made the surrounding districts whiter, and more Republican.

And abracadabra — we had a Republican House, and Sheheen wasn’t speaker anymore. And a few years later, the Senate followed suit. And the Black Caucus got a few more members, but they were now all in the minority party, which meant the caucus had traded away much of its ability to get anything done once elected.

The larger issue nationally is that voters no longer have a viable choice in general elections for Congress. Which is a terrible thing to have happened to our representative democracy.

7 thoughts on “Just how uncompetitive the U.S. House elections are”