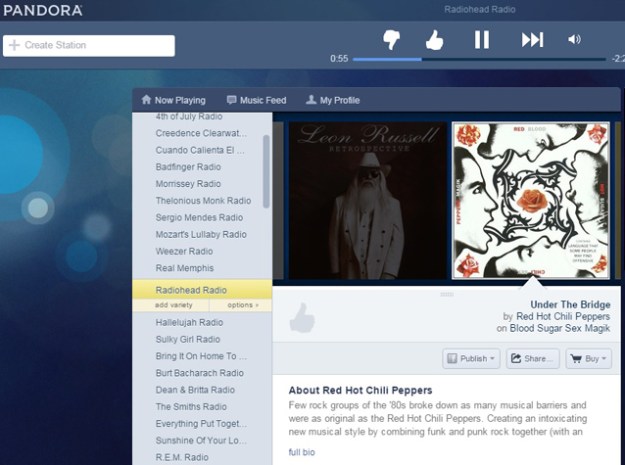 I had Pandora playing on my iPad while showering and getting dressed this morning, and I marveled at this sequence:

On Pandora, my Radiohead station just played “Paint It Black,” “All You Need Is Love,” and “The Wind Cries Mary.” Interesting…

What did those tracks have to do with Radiohead? When I listen to Pandora on my laptop, there’s a place where I can click to answer the question, “Why was this track selected?” I don’t see how to do that on the iPad app, though.

After that Tweet, I continued to be mystified by Dylan’s “Temporarily Like Achilles.” What really blew my mind, though, was that it was followed by Leon Russell’s “Shootout On the Plantation.
Dylan, maybe. Beatles, OK. Even the Stones. But Leon Russell?

Even when I can check, the answer to the question doesn’t help me much. Here are songs I heard later on the same station on my laptop, together with the “explanations:”

A Salty Dog by Procol Harum
Based on what you’ve told us so far, we’re playing this track because it features acoustic rock instrumentation, folk influences, mild rhythmic syncopation, thru composed melodic style and acoustic rhythm piano.

While My Guitar Gently Weeps (Live) by George Harrison
Based on what you’ve told us so far, we’re playing this track because it features electric rock instrumentation, blues influences, gospel influences, intricate melodic phrasing and thru composed melodic style.

A Hard Rain’s A-Gonna Fall by Leon Russell
Based on what you’ve told us so far, we’re playing this track because it features basic rock song structures, blues influences, gospel influences, mixed acoustic and electric instrumentation and acoustic rhythm piano.

Under The Bridge by Red Hot Chili Peppers
Based on what you’ve told us so far, we’re playing this track because it features a subtle use of vocal harmony, repetitive melodic phrasing, major key tonality, electric rhythm guitars and a dynamic male vocalist.

For What It’s Worth by Buffalo Springfield
Based on what you’ve told us so far, we’re playing this track because it features acoustic rock instrumentation, folk influences, call and answer vocal harmony (antiphony), demanding instrumental part writing and repetitive melodic phrasing.

To me, these explanations are non-explanations. The commonalities are just so generic, in pop music. What matters to me, though, is that I like all the songs. Pandora is able to go, “You, Brad Warthen, like this, so we think you’ll like this other, too.” And they’re so often right.

But Netflix, which has thousands of ratings from me to go by, is still befuddled as to what I’ll really like. Almost never does it suggest something I haven’t seen before, and then when I watch it, I think, “Wow, that was awesome; I can’t believe I hadn’t seen it before. Thanks, Netflix!”

Almost never. And yet, it happens all the time with Pandora.

What is it — is musical taste easier to predict, because of fewer variables? I don’t know… 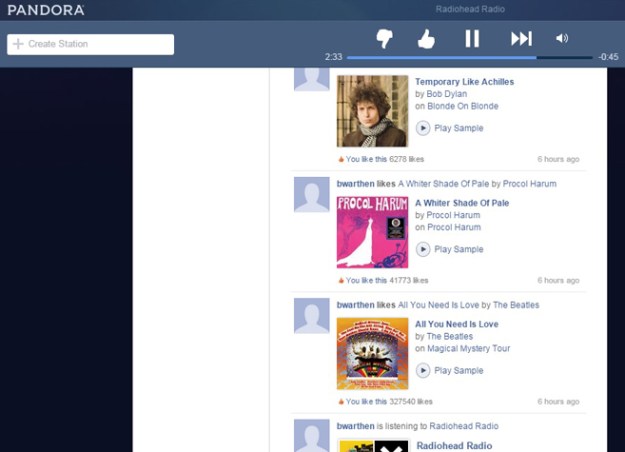 6 thoughts on “Why does Pandora get me, while Netflix doesn’t?”