I’ve recently written about three movies — ‘The Interview,’ ‘American Sniper‘ and ‘Selma‘ — that I had not seen (which kind of limited what I had to say about them). This past week, I had planned to see them all and write about them further. Which would have been quite the hat trick for a guy who is accustomed to waiting until films show up on Netflix.

I managed to see two of them. I still hope to see the other soon. 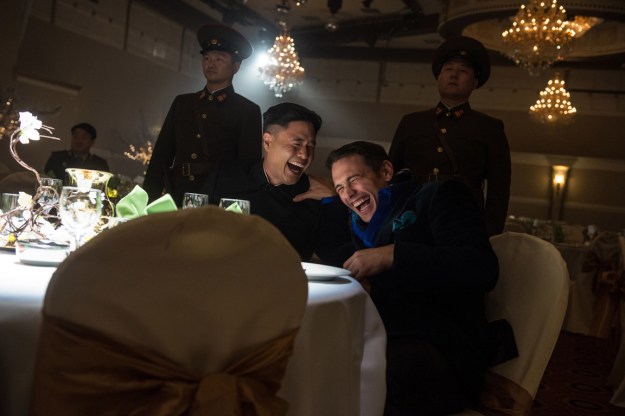 This one took the least trouble to see, which was good, because I wouldn’t have crossed the street to see it. I rented it from iTunes on my Apple TV, and it didn’t cost me anything because I had a gift certificate I hadn’t used up.

One of the more interesting things about this film was that North Korea was so ticked off about it, seeing that the guy who played Kim Jong Un was handsomer, more engaging — certainly more manly looking (both in terms of masculinity and maturity) — and more engaging on a human level than any of us have ever seen the Dear Leader be. I mean, even though the flick was making gross fun of him and making a joke out of killing him (which, one has to grant North Korea, is pretty offensive), it was actually kind of flattering to him.

If you can see it for free at any point and you want to know what all the fuss is about, it’s not completely unwatchable. But otherwise, don’t bother.

I had wanted to see this anyway, even more so after The Guardian (being The Guardian) practically painted Chris Kyle as a war criminal, but I sort of reckoned without the fact that everyone else in South Carolina wanted to see it this past weekend as well.

Bryan Caskey joined my younger son and me (neither Mamanem nor Bryan’s wife wanted to see it) at the 5:10 show at Dutch Square. Bryan got his ticket and went inside ahead of us. While waiting for my son to get through the queue, I spoke across the ticket-taker to Bryan, saying, “Don’t worry; there’ll be plenty of previews.”

The ticket guy said, “Yeah, but there won’t be plenty of seats.” He said this was their 11th show of the weekend, and several of them had been sold out.

Boy, was he right. With stadium seating, I normally sit about halfway up, so that the center of the screen is at eye level. But this time, we had to sit with the groundlings on the third row, way off to the side. So Bryan, my son and I all had to slide down in our seats with our knees propped against the seats in front and our heads resting back onto the tops of our seatbacks, looking almost straight up, at a weird, distorting angle. But I got used to it by about the 75th preview (OK; honestly, I didn’t count).

But other than that, Mrs. Lincoln, how was the show?

Good. But you knew it was going to be good. When’s the last time Clint Eastwood made a bad one? And the older he gets, he seems to get better. I’m thinking “Gran Torino” here.

And the portrayal of Chris Kyle was — matter-of-fact and respectful. It was the story of a guy who is definitely a sheepdog in the sheep/wolf/sheepdog model of killologist Dave Grossman — one of those who is neither a sheep nor a wolf, but one of those rare types who sees himself as a protector of sheep from wolves. And one of those rarer men (like, 2 percent of the male population) who doesn’t have nightmares after killing other people, if he has good reason to see the killings as morally justifiable.

Eastwood helps the viewer to understand a man like Kyle, without either condemning or overly glorifying him — although many will see him as a monster or as a red-white-and-blue excuse to wave the flag, according to their own proclivities. As I say, the depiction is respectful.

I could have used a little more examination of the psychology of a sniper. While many will feel like there was too much footage of Kyle taking careful aim on enemy combatants (and, in more than one case, “combatants” who are women and young boys, which is the thing that will make you want to walk out if anything does), I felt like not enough was done to show how most people would be torn up by that — say, with a side story about a fellow sniper who was not as unconflicted about his job. You know that the cost to Kyle is not nil, as you see the stress he undergoes after his fourth deployment. But I could have used more explication in that department.

Anyway, it’s worth seeing, whatever your attitudes on the subject matter. It’s well-done, and examines unflinchingly the moral ambiguity that accompanies any combat role, regardless of the conflict in question. 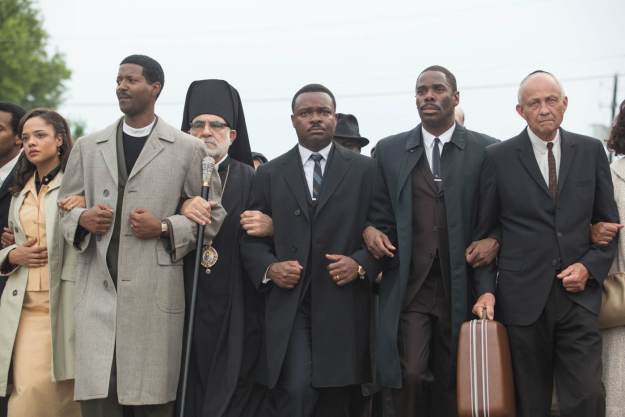 Still haven’t seen this one. I passed up, with some misgivings, the Urban League’s annual breakfast, justifying it by saying that I was going to go with some friends to see ‘Selma’ at the Nickelodeon as my way of observing the day.

But even though we were there half an hour ahead, we couldn’t get into the 2:30 show. Sold out.

Has going to the actual movie theater experienced some huge resurgence when I wasn’t looking? I haven’t been to a show as crowded as “American Sniper” in decades, partly because I try not to go on the opening weekend at the most popular times. (Wouldn’t you think a 5:10 show would be an awkward time — neither matinee nor evening-out time? I did.)

And then, to not get into the show at all, when the film’s been out a couple of weeks?

OK, yeah, I realize it was MLK Day, and it looked like there were some school groups there. But still.

Have any of y’all seen it? Can you give us a review?