Hey, did you know that Columbia had a poet laureate? Neither did I. It’s a new thing.

In fact, it didn’t become official until after the governor’s people had ditched the state’s poet from the inauguration ceremony — although the city had apparently made the decision to create the office earlier.

There’s a release about it here. 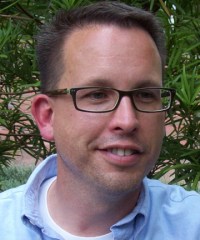 Anyway, the city’s first-ever official poet is USC English prof Ed Madden. This caused me to quote Will Ferrell as Buddy the Elf: “I know him!” Which is not something I can usually say about distinguished poets.

Ed was one of the first batch of eight Community Columnists we appointed back when I was first editorial page editor at The State, winning out over hundreds of competing entries in our contest. He and the others would write one column each a month for our op-ed page, for which we’d pay them a modest fee. Back in the days when there was money for such things.

So I knew he could write. I just didn’t know he did it in verse.

And you know what? The poem he read before the mayor’s State of the City speech last night is pretty good. Not to pick on Marjory Wentworth, but I think his piece was better than the one that she didn’t get to read at the Haley shindig. Having majored in history and journalism, I don’t have the words for explaining why that is, except to say that it strikes me as way literary and stuff.

A Story of the City

In the story, there is a city, its streets

straight as a grid, and in the east, the hills,

in the west, a river. In the story,

someone prays to a god, though we don’t

know yet if it is a prayer of praise

or a prayer for healing — so much depends

on this — his back to us, or hers, shoulders

bent. We hear the murmur of it, the urgency.

In the story a man is packing up

a box of things at a desk, a woman is sitting

in a car outside the grocery as if

she can’t bring herself to go in, not yet.

Or is the man unpacking, setting a photo

of his family on the desk, claiming it?

And is the woman writing a message to someone—

her sister maybe, a friend? In the story,

a child is reading, sunlight coming through

the window. In the story, the trees are thicker,

and green. In the story, a child is reading,

yes, and his father watches, uncertain

about something. There is a mother, maybe

an aunt, an uncle, another father. These things

change each time we open the book, start

reading the story over. Sometimes a story

about trees, sometimes about a city

of light, the city beyond the windows of a dark

a story about a ghost, his clothes threaded

with fatigue and smoke, with burning—you smell him

as he enters the room, and you wonder

about that distant city he fled, soot-shod,

looking back in falling ash at the past.

Sometimes it’s a story about someone

singing. Or someone signing a form, or speaking

before a crowd, or shouting outside a building

that looks important, if only for the flag there,

or the columns, or the well-kept lawn.

By now it’s maybe your story, and the child

is your child, or you, or maybe we’re telling

the story together, as people do, sitting

at a table in a warm room, the meal

an empty cup left out for a prophet,

an empty chair, maybe, for a dead friend,

the living and the dead, someone telling

a story about the people we are meant to be.

Above is video of him reading it. Click on this link to go straight to the poem.