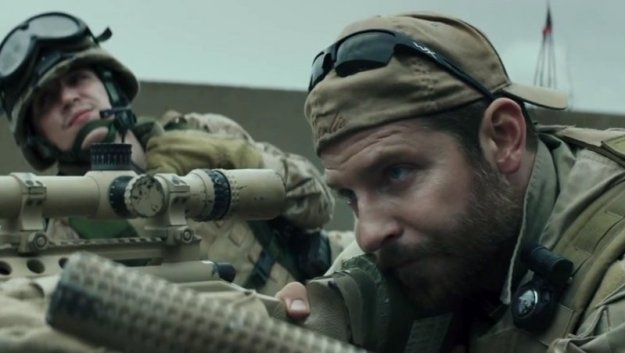 Has anyone seen “The Master,” one of Philip Seymour Hoffman’s last films? I saw it last night on Netflix (still fighting a cold, I’ve been vegging out in front of the tube a lot in my off hours) and was impressed. Not that it seemed to have much meaning, but it was interesting and well done, and had a couple of roles in it that actors would understandably kill for. Anyway, I was curious as to whether any of y’all had any thoughts about it.

I got up this morning thinking about that, but now, I think I may have to make one of my rare trips to the actual cinema to check out the subject of this Tweet from this morning:

The real American Sniper was a hate-filled killer. Why are some treating him as a hero? http://t.co/NECSwo9Vlxpic.twitter.com/5jb4nhyFEU

Yes, that’s the kind of post that makes you give a second glance to see whose feed this is, and then you say, “The Guardian, of course.”

This particular writer was bending over backward to defend Clint Eastwood, saying that however much “we diverge politically… he is not a black-and-white ideologue.”

No, the problem that the writer decries is that “much of the US right wing” has failed to appreciate that this is a “morally ambiguous, emotionally complex film,” and regard it “with the same unconsidered, rah-rah reverence that they would the national anthem or the flag itself.”

This is supported with examples from some extreme trolls who wish that critics of the film would eat s__t, be raped and die. The usual sick puppies who, I guess we are supposed to assume, represent “much of the US right wing.” Trolls. Really nasty ones.

And of course, you have to be a pretty sick puppy, or challenged in the reading-comprehension department, if you can read the movie’s subtitle — “The Most Lethal Sniper in U.S. History” — and not pick up on the idea that there’s a pickup truckload of moral ambiguity churning about here.

I know y’all all think I’m an incorrigible warmonger and all, but I’m someone who does not blink at the dark thicket of morally impossible choices and ethical quicksand into which war leads us. And I’ve always marveled that anyone can live with himself after having killed as a sniper. Yeah, I know; a sniper can save a lot of his comrades’ lives and perform a useful function in a just cause. But a sniper isn’t running and firing at people firing at him, with his blood pounding in his ears and adrenaline drowning his senses. He calmly, analytically, scientifically, artistically, with great care, observes his magnified victim close-up through his scope for much, much longer than any other soldier ever has an enemy in his sights. And the target is unsuspecting. He has no idea that his death is coolly studying him for long minutes, and then choosing the instant to calmly blow his head apart.

A sniper can be a hero. Everyone he knows may praise him for his skill and devotion to duty. But how do you live with yourself after that?

I wonder at such things. So I wanted to see the movie anyway. But I wanted to see it twice as much after reading this actual review of it, also in The Guardian. This writer doesn’t bother making excuses for Mr. Eastwood, basically lumping him in with the rest of those thoughtless rah-rah American nutters. “American Sniper is so conditioned by its first-person shooter aesthetic that it never widens its focus or pans left or right… while the war on Iraq is a just, noble cause.”

Did you catch that? War on Iraq? This, apparently, is what passes as cool, analytical rhetoric in The Guardian, distinguishing right-thinking people from the “black-and-white ideologues,” all of whom, evidently, are neoconservatives.

Anyway, I was grabbed by this passage from the review:

In one early scene, Kyle’s father tells him that the world is divided into three types: sheep, wolves and sheepdogs. Kyle sees himself as a sheepdog, a noble protector of the weak and the innocent, and it is clear that Eastwood does too. But is the world that simple? A different film (a better film) might have asked the wolves what they think, or at least wondered why the sheep behave as they do….

This grabbed me because that sheep/wolf/sheepdog model is central to Dave Grossman’s study of what he terms “killology,” a field of inquiry he has invented and generally has to himself. Lt. Col. Grossman is the author of that book I’m always going on about, On Killing: The Psychological Cost of Learning to Kill in War and Society. It demonstrates, through statistical analyses of battles and other means, that through most of human history, most soldiers have not fired their weapons in combat, and most who did fired over their enemies’ heads, for the simple fact that however they may have been trained, the training failed to overcome their profound aversion to killing fellow human beings. (Actually, in the past generation, U.S. and other advanced armies have overcome that reluctance through conditioning, which has led to more PTSD, which is a reason why Grossman wrote the book.)

That vast majority that doesn’t want to kill, and which suffers tremendous psychological damage when forced to do so, makes up the “sheep” category — not meant as a pejorative, but simply denoting normal, peaceful men.

I’m sometimes unclear as to who, exactly, makes up the “sheepdog” category. Sometimes, Grossman indicates it’s anyone who willingly dons the uniform — of the cop, the soldier, the sailor — and defends his or her society. Other times, though, he seems to be referring to a much rarer breed — the 2 percent of combat soldiers (according to a study from World War II, when there was such a vast cross-section of the male population to study) who “if pushed or given a legitimate reason, will kill without regret or remorse.”

The WWII study found these men to have a tendency to be “aggressive psychopaths.” But Grossman defends them from that damning term, explaining that they are just natural-born soldiers who “apparently do not experience the normal resistance to killing and the resultant psychiatric casualties associated with extended periods of combat.”

In that set of competing definitions, you’ve got enough ambiguity to employ an army of moral philosophers for a century.

Their the sort whose comrades might see as heroes, while those who have no military experience and look askance at those who do view as, well, psychopaths, in keeping with the time-honored tradition:

For it’s Tommy this, an’ Tommy that, an’ “Chuck him out, the brute!”
But it’s “Saviour of ‘is country” when the guns begin to shoot…

This 2 percent cadre of men tends to gravitate toward the special forces — toward jobs such as that of the subject of “American Sniper,” who was a SEAL.

Anyway, I need to see the movie, and see what I can learn from it. As should anyone who wants to take some responsibility for what we send other men to do for us.