I know practically nothing about Hayat Boumeddiene — variously described as the “partner,” “common-law wife” and “widow” of Paris kosher-grocery attacker Amedy Coulibaly — but I had several thoughts in quick succession when I read this over the weekend:

PARIS — French authorities on Saturday were hunting for a woman said to be “armed and dangerous,” who they believe is connected to three days of violence that reached a bloody denouement in twin sieges Friday. 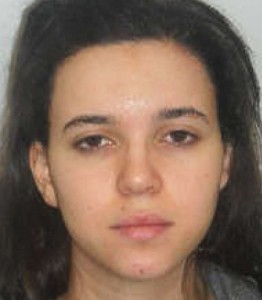 Hayat Boumeddiene, 26, may have fled France ahead of the attacks and may now be in Syria, French media reports said Saturday. The reports, which cited unnamed police sources, raised further questions about the attackers’ connections to organized Islamist militant groups.

Boumeddiene, 26, is the partner of Amedy Coulibaly, who on Friday seized a kosher grocery store in eastern Paris, killing four people at the height of pre-Sabbath shopping before being killed himself after an hours-long standoff. A day earlier, he killed a Paris police officer, authorities believe. During the Friday standoff, he said he was affiliated with the Islamic State, which is headquartered in Syria…

The thoughts, such as they are, were:

None of which is helpful to the investigation or anything (turns out she wasn’t even in the country at the time of the attack, but it’s understandable that authorities would like to talk with her), but those were the things that occurred to me at the time….

11 thoughts on “That female person of interest in Paris attacks”