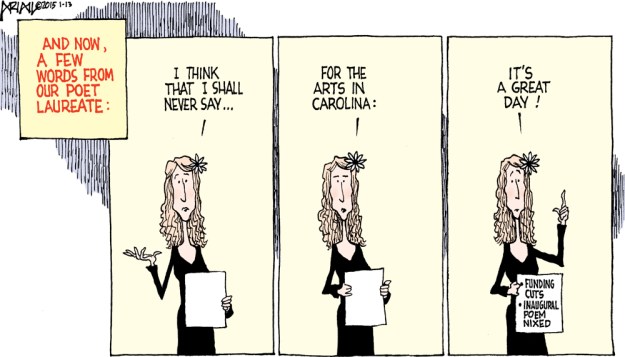 Sorry to repeat myself, but I find this digression from a previous thread sufficiently interesting for its own post.

M. Prince brought this story to my attention, asking, “Was it really a matter of too little time?”

Marjory Wentworth expected to read a poem Wednesday at her fourth gubernatorial inaugural, but South Carolina’s poet laureate has been silenced. 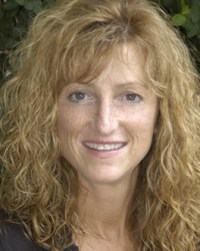 Gov. Nikki Haley’s inaugural committee turned down Wentworth’s words, saying there wasn’t time enough to read a poem during the inaugural. Wentworth was told she did not have a spot at the State House ceremony before her poem was finished and submitted to the governor’s office.

“While we appreciate Ms. Wentworth’s long service to South Carolina, the inaugural committee told her the 96th S.C. inaugural program — which, in part, celebrates our state’s rich culture — has been full for weeks,” Haley spokeswoman Chaney Adams said. “Scheduling constraints simply wouldn’t allow a poem to be read.”…

One doubts that it was just a lack of time. But if the organizers were trying to make a point by leaving her out, I don’t know what the point was.

Unless, even though they hadn’t seen her finished poem (which you can read here), they knew she was someone who might write:

Here, where the Confederate flag still flies
beside the Statehouse, haunted by our past,
conflicted about the future; at the heart
of it, we are at war with ourselves

Not very “It’s a great day in South Carolina!,” is it?

M. said maybe it was those lines. But he thought it was more likely these:

“at Gadsden’s Wharf, where 100,000
Africans were imprisoned within brick walls
awaiting auction, death, or worse.
Where the dead were thrown into the water,

and the river clogged with corpses
has kept centuries of silence.
It is time to gather at the water’s edge,
and toss wreaths into this watery grave.”

M. thought that maybe “somebody considered that sort of imagery too much a downer” for “the governor’s own great day in South Carolina.”

I responded that maybe we could persuade the organizers to invite Randy Newman to sing this at the inaugural.

Of course, that would depend on them completely missing the irony.

M. loved that idea, which shows we can agree on something.

On another subject, I had forgotten that we HAD a poet laureate. How does one run for that?

What do y’all think of her poem? It occurs to me that maybe the organizers are poetry snobs, the sort who sneer at Poe (not likely, but possible). Even to me, Ms. Wentworth’s imagery and messages seem too plain and obvious — too… prosaic — and lacking a bit in pretentious profundity. And I’m no poetry snob. I love Poe’s driving rhythm and rhyme.

But what do y’all think?