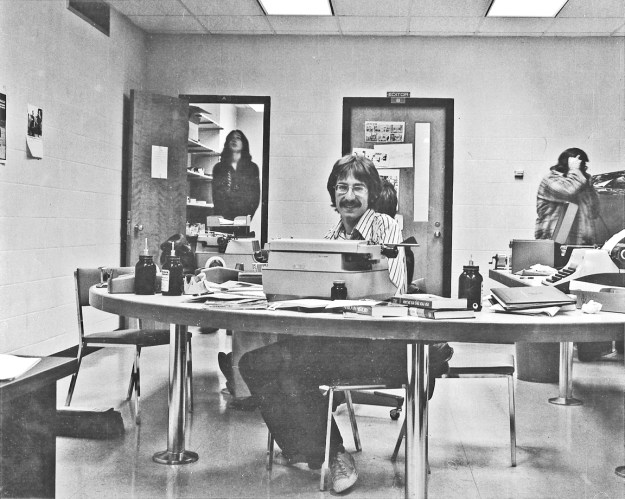 I ran across this picture during the same search that produced the one of Dylan and The Band.

Evidently, I did not take this. I don’t remember who did.

Anyway, that’s me front and center looking at the camera, with the Groucho mustache, the circa 1965 Beatles hair, the octagonal wire-rims, the distinctly big-collared 1970s sport shirt, and the white Keds. This was in the newsroom of The Helmsman, the student paper at Memphis State University, probably around the same time as the Dylan/Band picture. So somewhere in the 1973-75 range.

This was during my stint as either editorial page editor or news editor of the paper. I say this because I’m turned away from the manual typewriter and evidently pencil-editing someone else’s copy instead of writing. I’m sitting in the slot position of the copy desk, the standard U-shaped desk that an editor I worked with after graduation called “the elephant’s commode.” 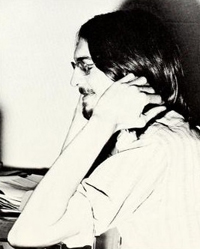 But we didn’t really have a formal copy desk and slot man. There were four or five kids, of whom I was one, who were the core of the paper and made everything happen, with other contributors coming and going. Another of the inner group is in the background at far right, his finger in his near ear as he tries to hear someone on the phone. His name was Oran; I forget his last name.

I don’t know what the long-haired guy standing in the doorway of the supply closet is looking at; he seems to be just grooving on a spot in the ceiling.

Note the detritus of a paper-based publishing system. Aside from the typewriters, there’s a pencil sharpener, a tape dispenser, a stapler, and several pots of rubber cement. The rubber cement was for gluing all the pages, or takes, of a story together into one long, continuous strip of paper. The piece was sent to a commercial print shop several miles away where the paper was put together, and which we had to visit to proof and let the pages go.

The newsroom was small. Whoever shot this is standing in the middle of it.

Dan pretends to point to something on a piece of copy I’m pretending to edit. This was for the yearbook. Notice we didn’t make the slightest effort to groom for the occasion…

The closed door behind me is the Inner Sanctum of whoever was our chief editor at the time — probably the late Dan Henderson, who was later an assistant managing editor at The Commercial Appeal. Oran was to work for them later, too, in a rural bureau in West Tennessee. Those bureau people weren’t in the Guild, and were treated like dirt by the people in Memphis. One night, Oran called in his story, and the editor took it, and asked all the questions he had while editing it, and then said, “By the way, we won’t be needing your services any more.” Yeah, he was fired. He had moved out of Memphis and set up residence in some dinky town for the sake of the paper, and that’s how they let him go. Sayonara, pal.

Some would say that’s a good argument for unionizing reporters, since it was the fact that Oran was not in the Guild that let him be treated this way. For my part, I think there’s something about Guild papers (The Commercial Appeal was the only one I ever worked at) that created an unnecessarily adversarial relationship between journalists and management, so the powers that be took out their hostility on the ones they could take it out on. But that’s just my theory…

13 thoughts on “And here I am as a tyro journalist, at about the same time”