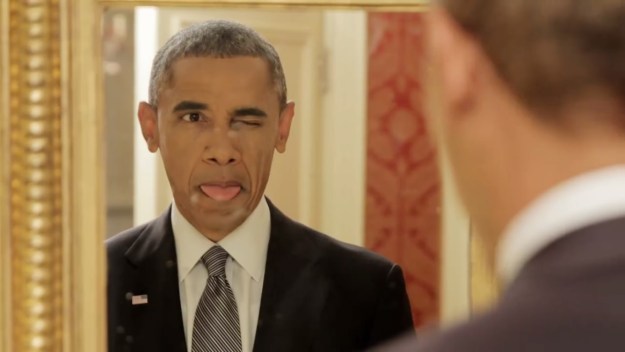 To see what I’m talking about, you’ll have to follow the link; I couldn’t find an embed code.

I thought about posting about this over the weekend, but didn’t. My mind was brought back to it by this piece in The Wall Street Journal this morning.

George Washington did not shake hands as president and would grip the hilt of his sword to avoid having his flesh pressed. The founding father understood that leadership in a republic demanded a careful balance between low populism and aristocratic lordliness. Personal comportment, the choice of clothes and carriage, modes of address: these things mattered. And so we have “Mr. President” as opposed to “His Highness.” Or “George.”

With Barack Obama —you won’t mind, Señor Presidente, if we call you Barry?—it’s another story. Dignity of office? How quaint. In this most self-infatuated of presidencies, the D-word is at best an accessory and more often an impediment to everything Barry has ever wanted to be: Cool. Chill. Connected.

So it was that, hours after the U.S. confirmed the murder of Kayla Jean Mueller at the hands of Islamic State, Mr. Obama filmed a short video for BuzzFeed, striking poses in a mirror, donning aviator shades, filming himself with a selfie stick and otherwise inhabiting a role that a chaster version of Miley Cyrus might have played had Hannah Montana been stuck in the White House after a sleepover with the Obama girls.

Ostensibly, the point of the video was to alert BuzzFeed’s audience to the Feb. 15 deadline for ObamaCare enrollment. If communicating with 20-somethings as if they are 11-year-olds is a way to get them to behave like grown-ups, then maybe the White House has at last found a way to make good on its make-believe enrollment numbers….

Now, you know, I’m normally not one to be out-harrumphed. I can be as stuffy as the next guy; probably more so if he’s not quite the thing. Today at the board of governors meeting at my club we had a stimulating conversation about the dress code, and while I didn’t actually join in, it’s because I was too busy holding myself back from saying “Quite right!” and “Capital!” at all the more Tory comments from others.

But I don’t know about this. While I quite take Mr. Stephens’ point that it’s absurd to communicate “with 20-somethings as if they are 11-year-olds,” I also applaud pragmatism in a leader. And if this is the way you have to communicate with them — well, one does what one must. 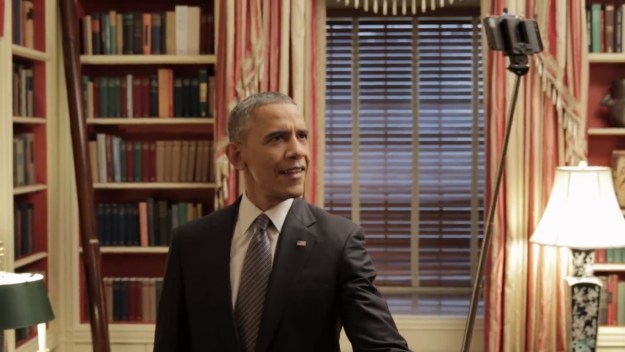 16 thoughts on “Did Obama undermine the dignity of the office on Buzzfeed?”