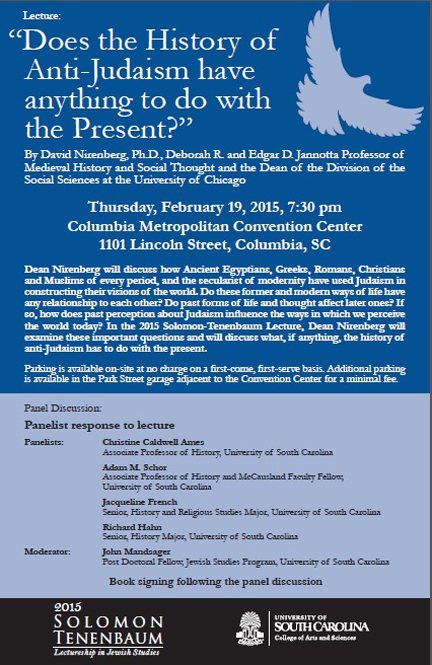 I’m planning to go to this lecture tonight at USC. Here’s the PDF of the image so you can read it better. And here’s a description:

Dean Nirenberg will discuss how Ancient Egyptians, Greeks, Romans, Christians and Muslims of every period, and the secularist of modernity have used Judaism in constructing their visions of the world. Do these former and modern ways of life have any relationship to each other? Do past forms of life and thought affect later ones? If so, how does past perception about Judaism influence the ways in which we perceive the world today? In the 2015 Solomon-Tenenbaum Lecture, Dean Nirenberg will examine these important questions and will discuss what, if anything, the history of anti-Judaism has to do with the present.

This is the annual lectureship that Samuel Tenenbaum funds. It’s usually pretty good. Frequently, these events give us on the Bernardin lecture committee a high bar to shoot for.

I hope to see you there.

One thought on “Join me at the Solomon-Tenenbaum Lecture tonight”