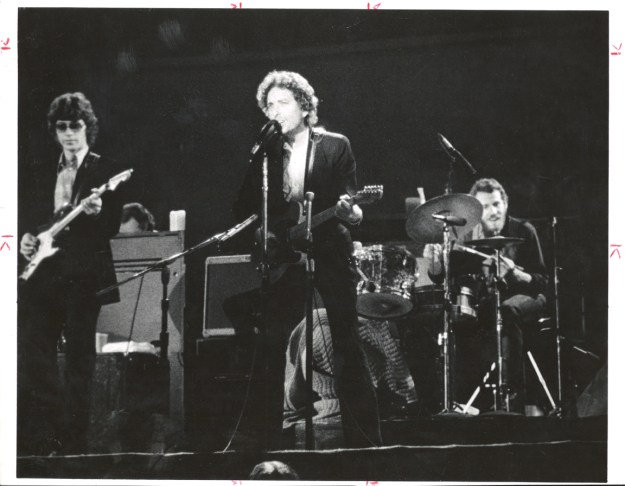 Yesterday, I was plowing through a box of old prints looking for something else, and ran across the image above. The little red crop marks in the margins tell me that this ran in The Helmsman, the student newspaper at Memphis State University (now University of Memphis), possibly with a review by me.

I don’t remember writing such a review, but I do remember the concert — one of the best ever. I wish I could have gotten a better picture. But with Tri-X film and my old Yashica SLR, this was about as good as I was going to get, with the detail in Bob Dylan’s face sort of blowing out because of the spotlight. I seem to recall developing and printing it myself, and not being able to get it better than this. (In those days you couldn’t just click “sharpen” in PhotoShop; you had to have skills, but eventually physical limitations were physical limitations — you had what you had on the negative, and could only do so much with the print.) I suspect we ran the image fairly small in the paper so you couldn’t see how bad it was. It would have been even better to run the whole image, instead of cropping it down to Dylan (leaving out Robbie Robertson, Levon Helm and the top of Garth Hudson’s large head). Don’t know who made that decision…

I shot this at the Mid-South Coliseum in Memphis on the night of January 23, 1974. The show was everything a fan could wish for — lots of Band material, plenty of Dylan. Dylan even did an acoustic set with guitar and harmonica, in a sort of bluish spotlight, and I remember having this weird disconnect looking at him: He looked so much like the cover of the greatest hits album that I couldn’t quite convince myself that this was real, and I was here. It was odd.

Anyway, I was referring to this show when I wrote this comment several months ago:

When I think of the way a band ought to look, this is the image in my mind. Almost this EXACT image, as I saw The Band and Dylan together on this same tour, in Memphis in 1974.

Ever since then, whenever I’ve contemplated the absurd extremes of costume donned by performers — from Bowie in his Ziggy phase to KISS to Devo to Lady Gaga, or for that matter going back to the way Brian Epstein dressed up the Beatles — I’ve pictured this, and thought, this is the way a band should look. Nothing should distract from the music.

It’s an ultimately cool, casual, timeless look. They could be graduate assistants, or guys sitting on a bench outside a saloon in the Old West. I had cultivated much this same look since my high school days. I bought myself a Navy blue tweed jacket with muted reddish pinstripes running through it that to me looked EXACTLY like what the guys in the Band — or for that matter, Butch Cassidy or Sundance — might wear. I wore it with a U.S. Navy dungaree work shirt that my Dad had given me, and jeans, and scruffy suede desert boots (like the ones Art Garfunkel is wearing in this picture).

Come to think of it, I’ve never really abandoned that look. Today, I’m wearing a vaguely green corduroy jacket with a charcoal-gray sweater vest over an unstarched sport shirt, with olive green chinos that are fraying at the cuffs.

It’s what I think is cool. And comfortable…

So when I ran across the picture, I thought I’d share it.