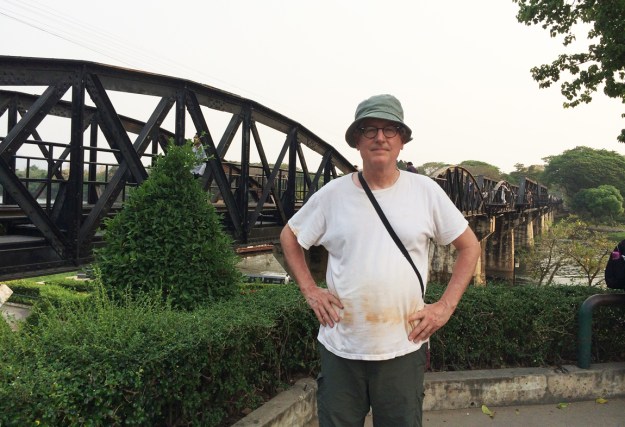 Well, I went to give platelets at the Red Cross yesterday, and I answered “yes” to the question about whether I’d been out of the country in the past three years, and that led to a long discussion about just where I had been.

Turns out, it wasn’t a problem that I was in Thailand per se. The Red Cross breaks it down much more locally than that, and the problem was that one of the many places we visited in Thailand was listed as posing a risk of malaria.

That was Kanchanaburi. Those of you who were following me on social media may have already seen the above picture of me taken in that town. I’m standing in front of “the” Bridge On the River Kwai, which while it’s not the one from the movie (the movie was fictional, based on a novel inspired by the real-life Death Railway), actually is where the still-active rail line first laid by slave labor (Allied POWs and civilians) under the Japanese crosses the Kwai.

As you can see, I’m looking pretty grubby. If the Red Cross knew everything I’d done that day, they really would have worried. I had spent most of the day with elephants — feeding them by hand, bathing them in the river, and riding them. Taking a midday break from elephant care, we had floated down the Kwai, way out in the country, for 40 minutes, without a boat. Just life vests. Very refreshing.

(We were at this really neat place a few miles out of town that rescues elephants from the logging industry and from begging in the streets, and enlists tourists to help in their daily care. This was the thing my daughter had most wanted to do while we were with her in Thailand, and it did not disappoint.)

Then, on the way back to the resort in Kanchanaburi, I realized we were passing close to the Bridge, which I had only seen in the dark, the night before. So I asked someone to rap on the back of the cab of the songthaew we were riding in, and hopped off alone to go check out the bridge.

I ran into three American veterans from Bangkok who were painting the base of a memorial to the Americans who had died building the railway. The wife of one of them took the above picture.

But I digress. The point is, I can’t give for a year. So some of y’all will have to take up the slack… 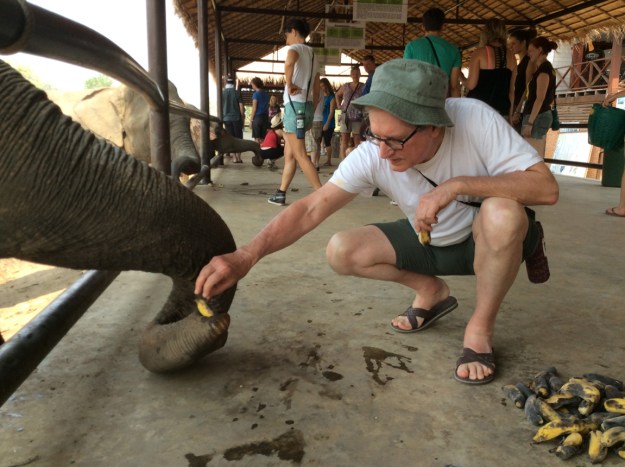 Here I’m feeding bananas to a rather elderly elephant named Wasana. She’s about 65 years old and a fairly slow eater for an elephant — so it took a little patience.

2 thoughts on “I can’t give blood for a year, because Kanchanaburi is on a list”