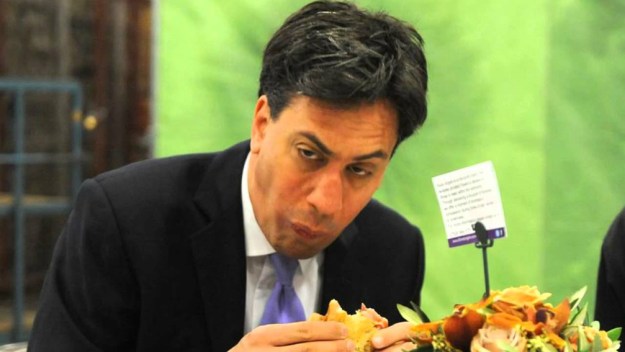 A penchant for awkwardness: Labour leader Ed Miliband having a spot of bother with a bacon butty.

In case you’ve been vaguely aware that there’s to be an election in the United Kingdom but don’t know a thing about it and would like to, you might enjoy reading this piece from the WSJ over the weekend.

It’s a sort of dummy’s guide — I mean, Yank’s guide — that catches you up, and makes the acquisition of that information fun. You learn, for instance, that one of the main problems facing Labour is that their leader has an uncanny knack for being caught in photographs looking very awkward.

The bottom line? Neither the Tories nor Labour are likely to win a majority, thereby giving us yet another uneasy coalition government. But the fun in the piece isn’t the conclusion; it’s the trip itself. A sample:

A British election is looming on May 7, and you might be wondering how it will all work. In a word: sensibly.

Here in the U.K., things are far simpler than in the U.S. We select local representatives we know almost nothing about, in the vague hope that everybody else will select lots of other local representatives from the same party. Then one party either has enough representatives to form a government on its own, or it has to cook up some sort of power-sharing arrangement, without bothering to ask the electorate about it. See? Easy. Like cricket….

One thought on “A nice, readable primer on the upcoming British election”