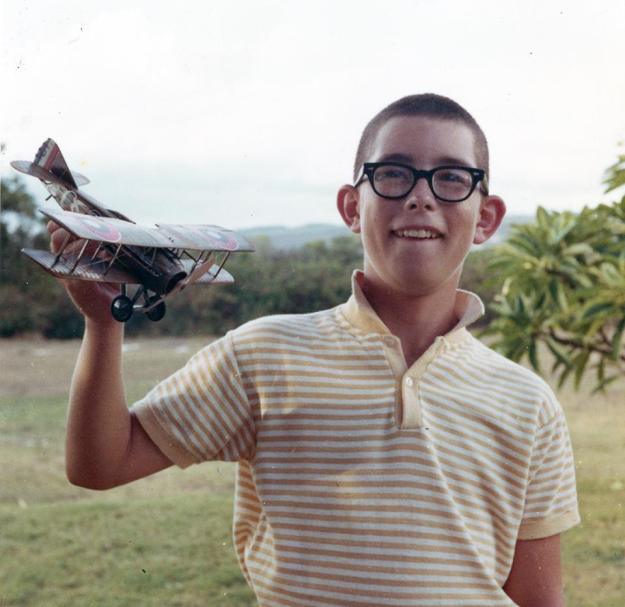 Y’all know that my high school classmate Burl Burlingame gets to build model airplanes and rebuild real airplanes — cool ones — for a living. Doug and I have both been to his museum, and seen his handiwork.

So where did it all begin?

As with most of us, Burl started building models as a kid. And today, he posted photographic evidence, with this explanation:

Clearly, the pop-culture image of the model-airplane enthusiast as a callow dweeb is completely self-inflicted, and completely at odds with our self-image as the only cool kids in school:

I’m wondering — is that behind your house in Foster Village? I ask because the background looks a lot like the view from my backyard when we lived in that subdivision. We had this unbelievable view of both Pearl Harbor and the Waianae range in the background. (The lots were terraced so that our backyard lawn was higher than the roof of the house behind us, making for an amazing panorama of southwestern Oahu.)

In fact, I’m flashing on a memory here. Unlike Burl, I wasn’t a master builder of models. I didn’t paint the pilot or other small details. I’d put on the decals, of course, but beyond that my finishing touches didn’t extend beyond maybe heating the point of a pin and using it to melt machine-gun holes in the wings and fuselage.

I definitely didn’t bother with details on the little model of a V1 buzz bomb that I test-flew in that backyard in Foster Village. I built it around a firecracker, wedged into the fuselage tightly by wrapping toilet paper around it, and threaded the fuse out through a hole before final gluing. (The V1, a fairly featureless rocket, was way too boring to look at, and there were no more than five or six pieces in the kit — the only thing that made it worth building was to blow it up.)

Then I took it out there, lit the fuse, and threw it. It worked — green plastic blasted everywhere. But it was over so quick, it didn’t seem worth the time it took to build the model, even as simple as it was. So that’s the last time I did that…

By the way, that’s a SPAD XIII. Burl had to tell me that, after I wildly guessed that it was a Sopwith Camel…