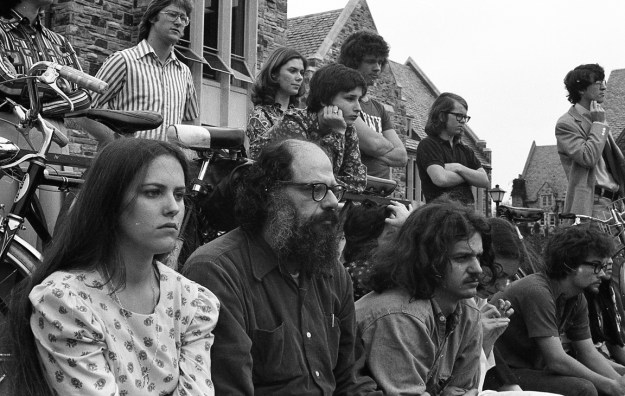 I think Ginsberg was sitting among us in the amphitheater waiting to be introduced here.

Several years ago, my wife gave me a scanner with an attachment for scanning negatives and slides. I had wanted this in order to start digitizing my vast stash of 35mm film from several decades of personal and professional photography.

I’ve never really undertaken the task systematically. The idea of trying to match up separate strips of film in glassine envelopes even to the point of getting them together in their actual rolls, much less trying to assign dates to each roll to get them in chronological order, is just too Herculean. Especially since scanning a single exposure at sufficient resolution to ensure good enlargements takes a couple of minutes.

But I do leaf through my negatives randomly from time to time and blow up a forgotten image from long ago. I was doing so over the weekend, and ran across these images from about 1973 or ’74.

Here you see two counterculture heroes of that generation, both of whom were participants in a speaker series at Southwestern at Memphis, now known as Rhodes College. We have Allen Ginsberg of “Howl” fame, and Daniel Ellsberg of the Pentagon Papers. This was when my wife and I were students at neighboring Memphis State University, now known as University of Memphis. (What is it about Memphis and constantly changing the names of colleges?) 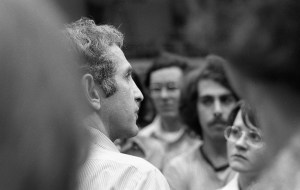 At least this shot of Ellsberg was in focus.

No, I don’t think Southwestern had a rule that your name had to end in “sberg” for you to speak there. But both were very much counterculture heroes at the time — Ginsberg as a writer and (more importantly) as the biggest surviving light of the Beat Generation, Ellsberg as the antiwar activist and forerunner of Julian Assange and Edward Snowden.

Not that they were heroes to me, mind you. But I was a student journalist, and they were big newsmakers. So I showed up, with my camera. (Also, my wife reminds me, the young woman who was our maid of honor in our wedding had been involved in bringing Ginsberg to the campus. I don’t know whether she was involved with Ellsberg.)

Also, the Beats loomed large in the legend of my wife and I getting together. We met at a party (at Southwestern, actually) that my wife and the future maid of honor were having for mutual friends who were getting married. During the party, J and I discovered that she was reading a Jack Kerouac biography even as I was reading On the Road for the first time. And the rest is history. (I had had that copy of On the Road for a couple of years, but had waited until that moment to read it.)

By this time, Kerouac and Cassady had been dead for years, so Ginsberg was the best we could do.

Anyway… I got to thinking about these photos this morning when I was reading this interesting review of a book, Days of Rage, about the violent fringes of American radicalism during that period. If you can get past the WSJ’s pay wall, you might want to check it out.

No, there’s no one-to-one comparison here. Compared to the likes of Bill Ayers (the Obama buddy!), Bernardine Dohrn and Terry Robbins, Ellsberg and Ginsberg were relatively tame. I mean, they didn’t want to blow anybody up or anything. What we had on that Memphis campus was more like “Days of Mild, Trendy Disaffection” than “Rage.”

But it still reminded me of these pictures, so I thought I’d share… 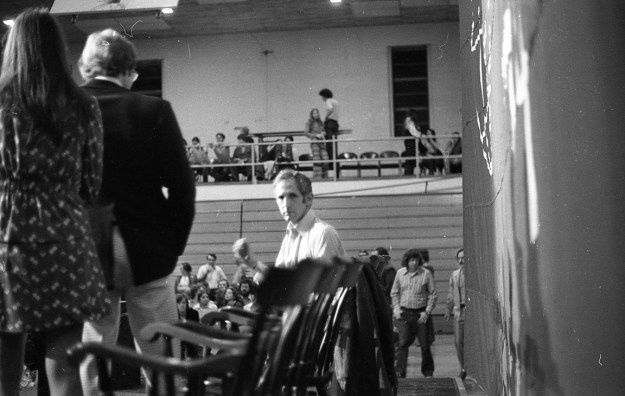 When I shot this, I thought I had an awesome picture — I had caught Ellsberg looking RIGHT AT ME in the wings. Only later did I see that he was out of focus. Ah, the limitations of real film and manual-focus SLRs…

3 thoughts on “Counterculture heroes, or, Back when radical was chic”