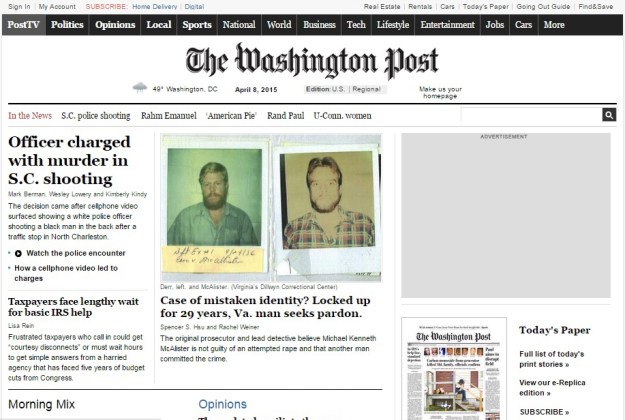 That’s kind of a two-edged headline, isn’t it? On the one hand, it suggests that it’s not that unusual for white cops to shoot unarmed black men in SC. And indeed, The State recently reported that police have shot at people more than 200 times in the past five years.

But my point was that the charges against North Charleston cop Michael Thomas Slager for shooting and killing motorist Walter Scott are not unique.

That was in my mind last night when I was sort of surprised to see the story leading the NYT. But I was in a rush, and my laptop was taking an absurd amount of time to perform the most basic operations, so I didn’t stop to look up the recent incidents that were at the back of my mind.

But this morning, when I saw the Washington Post story (which The State led with) that characterized the charge as “what seems to be an unprecedented move in South Carolina,” I thought I should take a moment to do some basic research. I was further spurred by this quote from my old friend Joe Darby, also in the Post:

“I am surprisingly and gratifyingly shocked because to the best of my memory, I cannot think of another occasion in which a law enforcement officer was actually prosecuted for something like this in South Carolina,” said the Rev. Joseph Darby, first vice president of Charleston’s NAACP branch.

Warming to his subject, Joe further spread his rhetorical wings:

“My initial thought was, ‘Here we go again. This will be another time where there will be a cursory investigation. It will be the word of law enforcement versus those who are colored as vile perpetrators. People will get very mad, but at the end of the day nothing will change.’ This kind of changed the game,” Darby said of the video and Slager’s arrest.

When Joe says he cannot think of another case ” in which a law enforcement officer was actually prosecuted for something like this in South Carolina,” I believe him. But his memory is dead wrong.

Just in the last few months, there have been at least two such cases, which I found in just a few moments this morning:

Now, let’s be clear: As The State reported, no cop of any race has yet been convicted in any of those 209 shootings in the past five years.

And these three cases seem to be unusual in that there was video evidence in two  cases, and the other took place right in front of the courthouse in Eutawville. So this should certainly add fuel to the national movement to have cops wear body cameras at all times.

But it’s plain that these charges were not “unprecedented,” and that Joe Darby’s memory is lacking. And maybe the world’s press got excited over this “unprecedented” case for the wrong reasons. (Based on modern news standards, it’s still a good story, because of the video causing the authorities to reverse themselves. The horrific video itself — which you can see below — is enough for such a story to go viral. But it’s not man-bites-dog.)

Finally, I just noticed that the Post has corrected itself. Its current version of the story no longer contains the unwarranted speculation that the situation is “unprecedented.” But the story still leads the Post’s site. More to the point, thestate.com is still leading with the old, erroneous version.