Some of his detractors on the Web have less trouble labeling him, although they sometimes seem to be trying too hard, I suppose in an effort to match his own vitriol. The characterizations come across as strained: “chinless monster,” “Tea Party troll,” “‘Family Values’ Lunatic,” “‘Pro-Life’ Sociopath,” and so forth.

Not that he hasn’t asked for it (in fact, he has seemed to relish the attention).

The couple or three times I’ve met him, he’s seemed a contained, respectful young man, although eager to be heard — not very different from most ambitious young white men one finds in the background of the GOP these days. Of course, I haven’t seen him in a while. The last time was when we appeared together on Cynthia Hardy’s talk show on WACH-Fox, and that was several years back.

But the Todd Kincannon who has roamed the internet with marked aggression in recent years has been something else — a disturbing figure, a sort of poster boy for the phenomenon whereby social media bring out the very worst in some people.

He’s been banned from Twitter, his weapon of choice, twice for such eruptions as: 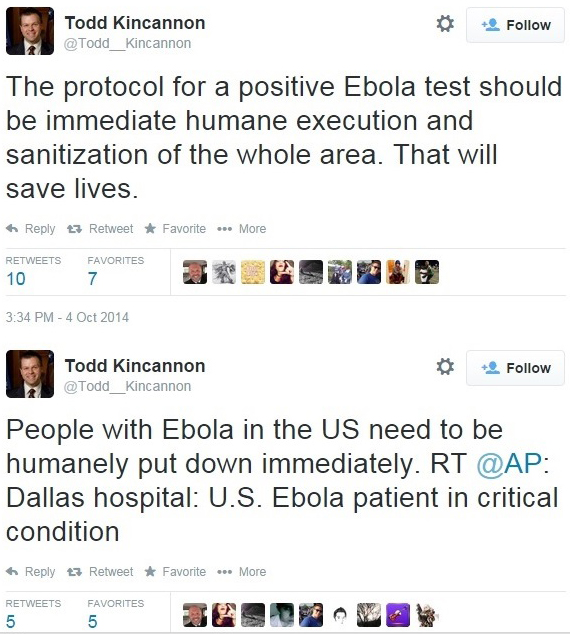 And, if you’ll forgive me for repeating it, his most infamous utterance:

A lot of people, particularly on the left, have a penchant for calling people they disagree with “hateful.” I’ll see the word “hate” used, and I’ll compare it to the comment or position that it’s applied to, and it just doesn’t match up.

Those Tweets from Todd Kincannon? Now those are hateful, even if he’s only doing it to get attention. Just for future reference, this is the standard for the word.

Back to our topic…

Todd is in the news again:

A former executive director of the South Carolina Republican Party arrested Monday for charge of criminal domestic violence has been released on a $5,000 bond. 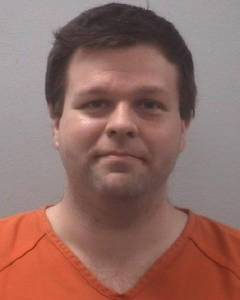 James John Todd Kincannon, 33, who is also an attorney, was arrested in connection with an earlier incident that caused his wife to tell deputies she was fearful for her life, Lexington County Sheriff Lewis McCarty said in a statement released Monday.

Ashley Griffith stated to deputies that on March 26 she was involved in an altercation with her husband who became angry with her after the two left an event, an arrest warrant alleges. According to the warrant, Griffith told deputies that Kincannon yelled at her and used profanity while driving near Irmo. Griffith also said that she lowered her window and yelled at passing motorists to help her while she pleaded with Kincannon to stop the car.

Griffith said Kincannon began driving the motor vehicle erratically and avoiding traffic lights while driving at a high rate of speed, the arrest warrant alleges. Griffith then tried to exit the car but Kincannon grabbed her arm in order to stop her…

For his part, Kincannon blames his behavior on the prescription, non-narcotic antitussive benzonatate: “I’d never taken it before, and took it for the first time last night. Basically, I went completely crazy after taking it.”

Folks, I’ve taken benzonatate. I took a LOT of it early this year, when I was having trouble functioning because of a cough I couldn’t get rid of. For a couple of weeks, I took it every eight hours. It helped some. It did not make me violent, or lead to any sort of out-of-control behavior. Yes, drugs affect different people different ways — the old prescription asthma medication Tedral used to make me paranoid if I took it with caffeine. I really thought people around me were deliberately trying to upset me. But I didn’t do anything about it, because I knew the reaction was irrational. 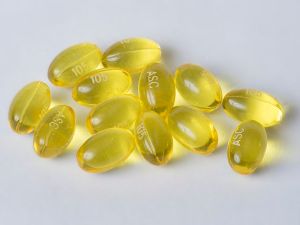 Of course, he does claim that he did the ONE thing you are never supposed to do with benzonatate: bite down on the capsule and break it before swallowing it. As Wikipedia warns, “Excessive absorption of benzonatate will occur if the gelcaps are chewed or allowed to dissolve in the mouth. This may lead to an overdose of the drug. Overdose of benzonatate may manifest as central nervous system side effects, such as mental confusion and hallucination, restlessness and tremors.”

Still, I don’t find benzonatate to be a persuasive explanation. It seems a bit too neat. It suggests that he’ll be fine if you keep him away from cough suppressants. And social media (was he on benzonatate when he posted those Tweets? no, because he said this was the first time he’d had it). And, I suppose, red kryptonite.

Here’s hoping Todd Kincannon gets it together, and soon. What we’ve seen over the last couple of years is the spectacle of a man unraveling. Now that it’s gotten to the point of violence, it’s pretty scary…

7 thoughts on “The unraveling of Todd Kincannon”