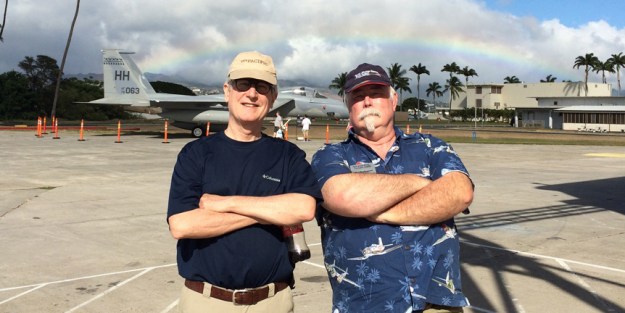 On Ford Island, in the middle of Pearl Harbor, with Burl Burlingame.

There are so many things I’d like to share with y’all from our trip to Thailand, but I don’t know where to start. My thoughts of how to approach it have ranged from trying to write a day-by-day account, in installments, or just throw in a travelogue piece now and then as the opportunity occurs.

Those of you who followed me on social media during the trip already have a rough idea of where we went and what we saw, but I need to get something down in greater depth before I forget. If only days on vacation could be 48 hours long — 24 to experience it, and 24 to write about it.

Anyway, today I thought I’d share something from near the end, since it involves a regular on this blog — Burl Burlingame, my high school classmate. He and I graduated from Radford High School in 1971. I was only there for a year, but cherish fond memories of the time.

You may or may not know that Burl, who was a real Renaissance Man in high school (writer, photographer, musician, cartoonist, actor and all-around wag), also spent a lengthy career in newspapers. Except Burl stayed in Hawaii to pursue his craft, while I returned to the Mainland. Another big difference — on the side, Burl earned a reputation over the years as an authority on military history.

So instead of his newspaper career ending with his being laid off, Burl left under his own power — to become curator, and later historian, at the Pacific Aviation Museum, which is located on historic Ford Island in the middle of Pearl Harbor.

It’s now physically easier to get to Ford Island. In my day you had to go onto the Navy base and catch a ferry. Now, there’s a causeway so you can drive out there — but you still have to get past the Marines on sentry duty, and these days they’re dressed and armed for combat, rather than wearing the blue dress “C” uniforms that I remember. (The causeway is featured frequently on the reboot of “Hawaii Five-O” — in the pilot, you can see the main characters driving out to Ford for no particular reason beyond the fact that the scenery is awesome.)

So to save us security hassles, Burl met us at the Pearl Harbor Visitor Center and drove us out in his car. Then he gave us the VIP tour, introducing me around as a big-time blogger from the mainland. Then he used us as guinea pigs. He’s thinking of adding a tour of the whole island as one of the museum’s features, so he took us on the route he’s been thinking of, let us stop and get out whenever we wanted, and timed it to see how long it would take (about an hour, as it happened with us).

Then he took us to dinner at a place overlooking Pearl, and finally we went downtown to meet his wife, Mary, who is still an editor at the paper and had Saturday night duty.

Below are some images, with cutlines, from what we saw. 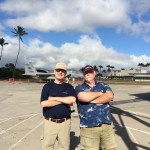 They’re Back and They’re Bad! Posing outside the museum in front of the rainbow that Burl had arranged for our visit. Note his proprietorial air. 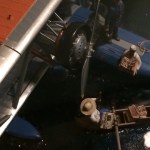 Burl is one of the best builders of airplane models in the country. Here, the inch-high figures are removing stacks of newspapers from a seaplane. Burl made the papers from microfilm of real pages. 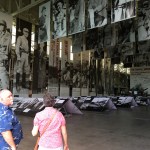 Admiring Burl’s new exhibit about the U.S.-Chinese alliance in WWII. 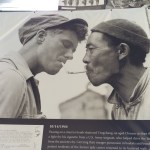 From the U.S.-China exhibit. This is a great shot of one ally giving another a light. 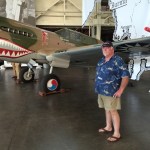 Burl in front of one of the museum’s trademark exhibits — a P-40 painted as a Flying Tiger. 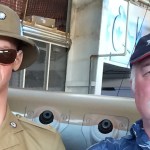 This is amazing — Burl sculpted this effigy of Flying Tiger Commander Claire Chennault from scratch. Looks just like him. 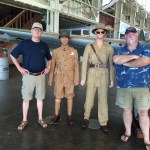 For scale, we pose with “Chennault” and a Chinese ally. Yes, the helmet came from ties with the Germans. History is weird. 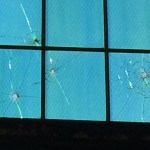 Machine-gun holes in the windows of the big hangar, left from the attack on Dec. 7, 1941. 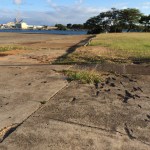 The pockmarks in the concrete outside were caused by a Japanese bomb. 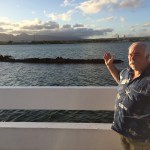 You know about the Arizona Memorial. Here, Burl shows us the rusting hulk of sister battleship Utah, on the opposite side of the island. 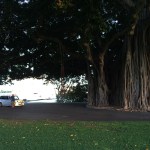 This banyan tree on Ford is amazing. Note how small Burl is standing near its base. 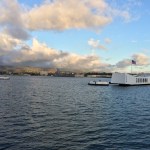 The familiar profile of the Arizona Memorial, from near the banyan tree. 1,102 men still lie beneath it. 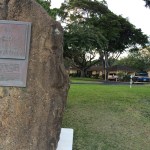 Beyond this plaque is the Nob Hill house used as John Wayne’s quarters in “In Harm’s Way.” 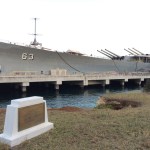 USS Missouri, tied up in the rough location of Battleship Row. The ship on which the war ended, in the place where it began (for the U.S.). 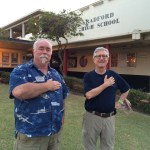 After leaving Ford, Burl and I paused to pay respects to our Alma Mater. 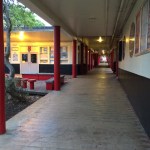 Another shot of Radford HS. We didn’t have hallways; we had breezeways. 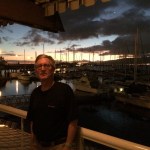 At Schooner’s restaurant, on Pearl Harbor. 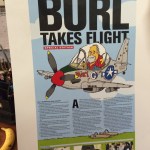 Burl’s going-away page from when he left the newspaper. 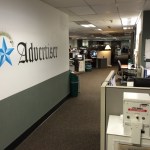 The Star-Advertiser newsroom. Burl has a good story to tell regarding that newspaper rack, which he appropriated when a predecessor paper closed.

3 thoughts on “Touring Ford Island with our own Burl Burlingame”