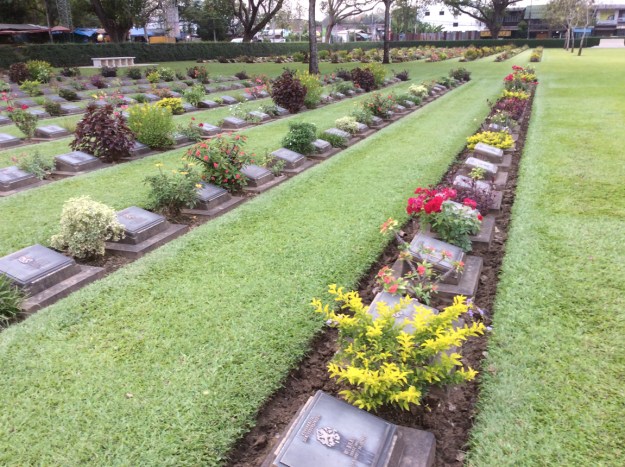 Reading various editorials and such about Memorial Day, I’m reminded of our time in Kanchanaburi, Thailand, where so many suffered so much as prisoners of the Japanese during what is referred to locally as “the war of 1939-1945.”

Specifically, I’m reminded of how deeply impressed I was by how beautifully maintained the cemetery for British and Dutch POWs was.

Yes, I know this is American Memorial Day (known in SC, at least until recently, as “Yankee Memorial Day”). But this is what I thought of. And there is an American angle to this mostly British story. 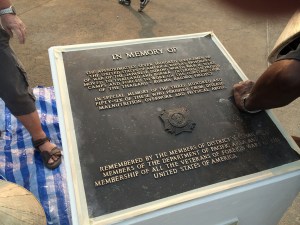 The monument says 356 Americans died building the railway; Wikipedia says 133. I don’t know which is right.

You’ve seen the picture of me standing in front of The Bridge on the River Kwai. Well, that was taken by the Thai wife of one of a trio of American veterans I ran into next to the bridge. It was hard to miss them — two middle-aged white guys and a black guy busily painting and restoring the monument at right. Even though two of them were wearing the proverbial Asian conical hat.

They were from an American veterans’ lodge in Bangkok. They had come to spruce up the one monument I saw in the town to the 133 Americans who died building the Death Railway or Burma Railway connecting Bangkok to Rangoon for the Japanese.

I asked them how to find the cemetery where the POWs lay (thinking at this point there would be Americans there among the Brits). They gave me rough directions — too rough, it would turn out — and an idea of how long it would take to walk there. I thanked them for their service, got my picture taken, and hiked back upriver to our resort.

When I got there, we decided to go see the cemetery before dark, which was coming on soon. So we headed out in the general direction on the Maenamkwai Road. Maenamkwai ran parallel to the river, and was something of a party district, as evidenced by the signs in front of pubs offering such experiences as “Get Drunk for 10 baht” — which seemed both a fiscal and physical impossibility, 10 baht being just under 30 cents, but I don’t know because I didn’t test it. Those kinds of places were a bit… unsavory. Quite a few of the patrons were white men about my age — some Brits, some other nationalities — who could occasionally be seen groping the pretty young Thai girls.

We began to despair of finding the cemetery based on the veterans’ directions and the insufficiently detailed map we’d obtained at our resort. Finally, we decided to ask directions of a typically seedy-looking white guy we encountered coming out of a Tesco Express. He wasn’t, as I’d hoped, a Brit. He was French, and had no English. I was enormously proud that, though I think of myself as having no French, I managed to come up with “le mort du guerre” in my effort to tell him what we sought. (Google Translate says I should have said “les morts de la guerre,” but whatever — he seemed to understand). However, he was much confused by our map and perhaps by his own whereabouts — I suspected that he’d spent at least 10 baht at one of the local establishments — and his directions were decidedly vague.

But we carried on, and eventually found it, a few blocks further.

As I said, I was deeply impressed by what we found. Not just the sheer number of graves — almost 7,000, according to Wikipedia — but how meticulously they had been cared for. One section was cordoned off, where someone was putting in new sod so as the improve upon the near-perfection. I was astounded that a graveyard so far away from the families these men left behind was maintained to this extent. (I noted the plaque saying the land was the gift of the Thai people, but I learned later that the graves are maintained by the Commonwealth War Graves Commission.)

When we arrived we were accosted by a couple of young Thai women. One of them explained that her friend was studying English, and had come here hoping to find someone to practice with — which impressed me with her initiative and desire to learn (if only that Frenchman had had such an ambition). So we chatted a bit along the lines of “Hello, how are you?” Then I excused myself because the light was failing and I wanted to explore the cemetery.

My aim was to find the Americans, but there were none. I kept walking from section to section, thinking that the next one would be the American grouping. No luck. I would later learn that the American remains had been repatriated. Eventually, I gave up on my chauvinistic impulse, and appreciated what I found. Most were from the Commonwealth, although there was a big Dutch section with 1,896 graves.

All these mostly young men, who died under such horrific conditions, at the hands of an enemy that regarded and treated them as less than human, under that generation’s twisted version of the Bushido code. All those families that would never even be started back home, on the other side of the world.

As we headed back, we passed Beata Mundi Regina War Monument Catholic Church, which was founded by some Carmelite nuns who located there to care for the graves. I don’t know whether they are still the ones who do that work, under the aegis of the commission, but whoever does does so lovingly.

That night, I purchased The Bridge on the River Kwai from iTunes — I wanted my daughter to have some idea of what had happened there — and tried to watch it on my iPad, but the wi-fi had trouble handling it. I would finish watching it after I got home, and also order the DVD of “The Railway Man” from Netflix.

But of course, there’s no way I will ever fully appreciate what those men experienced there. 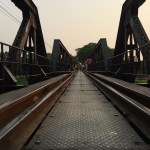 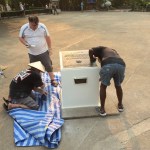 The three Americans I found painting the base of the monument next to the bridge. 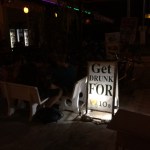 It seemed a fiscal and physical improbability, but I didn’t try, so I don’t know. 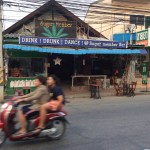 There was a theme to the pubs along Maenamkwai Road. 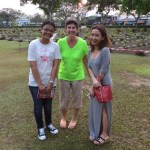 The one on the right was the English student; her friend on the left had brought her here. 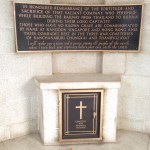 An explanatory plaque. The little sepulcher below houses a phone book-like list of the names of the dead. 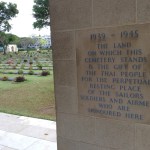 Another message carved at the entrance to the cemetery. 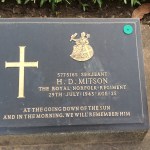 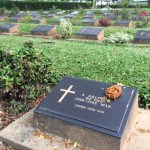 The shriveling flowers laid across this one were one of the few notes of imperfection. 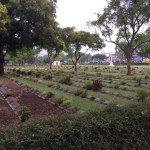 I kept trying different angles to capture the enormity of the place, unsuccessfully. At left is the area being resodded.