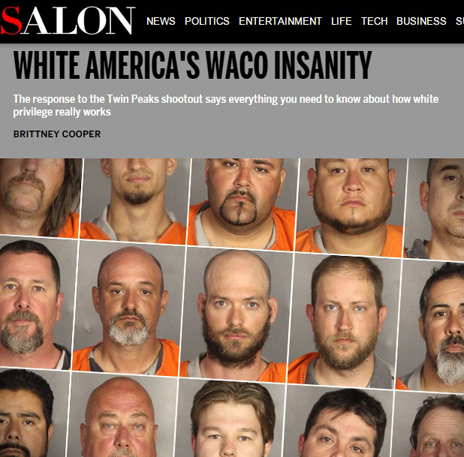 When I saw the above sub-headline, I said, “say what?”

Then I said it again when I started reading it, then a few more times as I made my way through it, then once more when I was done.

So, since Kathryn’s always getting on me about my “privilege blindness,” and this writer does the same, maybe she can ‘splain this to me.

Because it made NO kind of sense. An excerpt:

White people, even well-meaning and thoughtful ones, have the privilege of looking at deadly acts of mass violence of this sort as isolated local incidents, particular to one community. They do not look at such incidents as indicative of anything having to do with race or racism. But everything from the difference in law enforcement response to media response tells us what we need to know about how white privilege allows acts of violence by white people to be judged by entirely different standards than those of any other group. If a Black motorcycle gang had engaged in a shootout in a parking lot, any honest white person will admit that the conversation would have sounded incredibly different.

Frequently in conversations that I have observed or participated in with white people about race, the claim is levied that it is Black people “who make everything about race.” But this incident in Waco gives lie to that claim. It turns out that when white privilege is in clear operation, white people are invested in making sure that we don’t see race in operation. Charles Mills, a philosopher of race, has a term which I think applies here: epistemology of white ignorance. By this means, he means that white people have created a whole way of knowing the world that both demands and allows that they remain oblivious to the operations of white supremacy, that white people remain “intent on denying what is before them.” Thus even though three gangs have now attacked each other in broad daylight and killed or injured 27 people, there is no nagging, gnawing sense of fear, no social anxiety about what the world is coming to, no anger at the thugs who made it unsafe for American families to go about their regular daily activities without fear of being clipped by a stray bullet, no posturing from law enforcement about the necessity of using military weapons to put down the lawless band of criminals that turned a parking lot into a war zone in broad daylight. More than that, there is no sense of white shame, no hanging of the head over the members of their race that have been out in the world representing everything that is wrong with America.

That kind of intra-racial shame is reserved primarily for Black people.

Most white citizens will insist that this was just an isolated incident, even though the gangs were already under surveillance for consistent participation in criminal activity. And this studied ignorance, this sense in which people could look at this set of incidents and simply refuse to see all the ways in which white privilege is at play — namely that no worse than arrest befell any the men who showed up hours later with weapons, looking for a fight — returns me to the words of Malcolm X. For many Americans, this is just good ole American fun, sort of like playing Cowboys-and-Indians in real life. As Malcolm reminded us, “whites idolize fighters.” So while I’m sure many Americans are appalled at the senseless loss of life, there is also the sense that this is just “those wild Texans” doing the kind of thing they do.

White Americans might also deny the attempt to “lump them in” with this unsavory element. But the point is that being seen as an individual is a privilege. Not having to interrogate the ways in which white violence is always viewed as exceptional rather than regular and quotidian is white privilege. White people can distance themselves from their violent racial counterparts because there is no sense that what these “bikers” did down in Texas is related to anything racial. White Americans routinely ask Black Americans to chastise the “lower” elements of our race, while refusing to do the same in instances like this. Yes, white people will denounce these crimes, but they won’t shake a finger at these bikers for making the race look bad. It won’t even occur to them why Black people would view such incidents as racialized.

Such analyses are patently unacceptable. And they are possible because white bodies, even those engaged in horrendously violent and reckless acts, are not viewed as “criminal.” Yes, some police officers referred to the acts of these killers in Waco as criminal acts and them as criminals, but in popular discourse, these men have not beencriminalized. Criminalization is a process that exists separate and apart from the acts one has committed. It’s why street protestors in Baltimore are referred to as violent thugs for burning buildings, but murderers in Waco get called “bikers.” And if thug is the new n-word (and I’m not sure that’s precise), then “biker” is the new “honky” or “cracker,” which is to say that while the term is used derisively and can communicate distaste, it does not have the devastating social effects or demand the same level of state engagement to suppress such “biker-ish” activity as we demand to suppress the activities of alleged “thugs” and “criminals.”

Near the end, she writes, “there is something fundamentally dishonest about a society that revels in the violence of one group while demanding non-violent compliance from another.”

Say WHAT? Who is reveling in what violence?

A weird piece. But this is, after all, Salon, which also today offers us this elevating gem:

,,, a Tweet that, let’s face it, doesn’t even make grammatical sense…

79 thoughts on “Perhaps Kathryn can translate this for me”