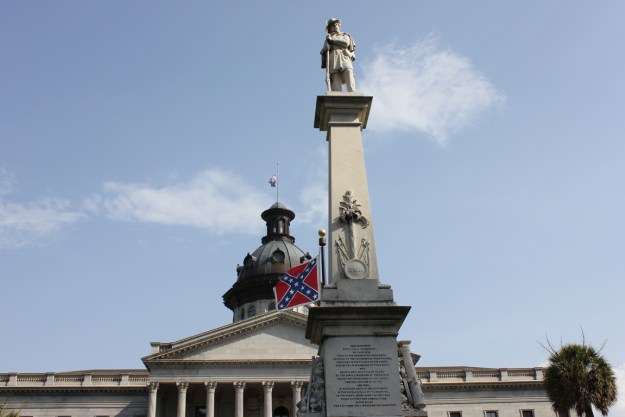 I say that not to suggest moving the monument. I just want to emphasize that the folks out there muttering darkly about how we’re trying to “erase history” by moving that flag that was put up in 1962 generally don’t know a lot about our postwar history.

I wrote this column to run on July 2, 2000 — one day after the old naval jack was removed from the dome, and the battle flag of the Army of Northern Virginia was placed behind the Confederate flag monument.

My purpose in writing it was to let it be known from the very moment of the compromise, that I was not satisfied with it, and saw it as by no means a permanent solution. There was very little appetite for continued debate on the subject at this moment, and I was acutely aware of that. People were flag-weary. But while most folks were celebrating, I wanted to signal that this wasn’t settled, and foreshadow the debate to come…

An important thing to remember about monuments: They aren’t set in stone.

OK, bad choice of words. They are set in stone, or concrete, or something along those lines. But that doesn’t mean that they can’t be modified or moved.

Why? Because so many groups that advocated moving the flag said to put it instead in a more historically appropriate setting. And what more appropriate place could there be to put a soldier’s flag than alongside the monument to the soldiers who served under it? It’s just too bad that that monument is in the most visible location on the grounds. There’s nothing we can do about that, is there?

Well, here’s a fun fact to know and tell: The state’s official monument to Confederate soldiers was not always in that location. In fact, that isn’t even the original monument.

I had heard this in the past but just read some confirmation of it this past week, in a column written in 1971 by a former State editor. When I called Charles Wickenberg, who is now retired, to ask where he got his facts, he wasn’t sure after all these years. But the folks at the S.C. Department of Archives and History were able to confirm the story for me. It goes like this:

The original monument, in fact, wasn’t even on the State House grounds. It was initially erected on Arsenal Hill, but a problem developed – it was sitting on quicksand. So it was moved to the top of a hill at the entrance of Elmwood cemetery.

The monument finally made it to the State House grounds in 1879. But it didn’t go where it is now. It was placed instead “near the eastern end of the building, about 60 feet from the front wall and 100 feet from the present site,” Mr. Wickenberg wrote.

But another problem developed: The monument kept getting struck by lightning. “The last stroke” hit on June 22, 1882, and demolished the stone figure.

At this point, if I were one of the folks in charge of this monument, I might have started to wonder about the whole enterprise. But folks back then were made of sterner stuff, and they soldiered on, so to speak.

At this point a new base was obtained, with stirring words inscribed upon it, and “a new statue, chiseled in Italy,” placed at the top. On May 9, 1884, the new monument was unveiled and dedicated in the same location in which we find it today.

So we see that the folks who lived in a time when “the Recent Unpleasantness” was actually recent – and burning in their personal memories – had to try four times before they came up with a way that suited them and their times to honor Confederate sacrifice.

In light of that, why should anyone assume that we’re finished deciding how to remember the Confederacy in our time?

Am I suggesting that we move the monument yet again? Not necessarily. I don’t think anybody’s ready for that battle yet. (Anyway, the Legislature doesn’t meet again until January.)

But I am saying that alternatives to the present arrangement exist. For instance. . . .

Remember the proposal that came up in the heat of the House debate to put the new Army of Northern Virginia battle flag within the context of a group of flags honoring S.C. veterans of other wars? The plan died partly because the details were sketchy and partly because House leaders didn’t want to consider anything new at that point.

Well after the present arrangement was safely passed and signed, that plan was resurrected – in an improved form – by Sen. John Courson, who had already done so much to bring the compromise to fruition over the past six years.

Sen. Courson’s resolution, co-sponsored by the 19 senators who, like him, are military veterans, would create a commission to “design and establish an appropriate monument to be placed on the grounds of the Capitol Complex to recognize and honor the accomplishments of South Carolina veterans who have served honorably, in peace or war, in any of the five branches of the Armed Forces of the United States of America.”

The monument would consist mainly of the official flags of the U.S. Army, Navy, Marines, Air Force and Coast Guard. Thereby all who served our nation – black and white, from the Revolution to Kosovo – would be honored the same way we are honoring those who served the Confederacy.

The plan leaves site selection to the new commission, but Sen. Courson says there is only one place left on the grounds that could easily accommodate such an addition – the same grassy area where the ANV battle flag was raised on Saturday.

The resolution was filed at the last minute and automatically died at the end of the session. But Sen. Courson introduced it anyway to give lawmakers something to think about between now and next January.

So you see, the present arrangement – with the Confederate banner sticking out so conspicuously by itself in a prominent place – really isn’t set in stone, in the metaphorical sense.

Sen. Courson has presented one viable alternative. There are no doubt others.

I was being generous there suggesting Courson’s idea.

The best proposal to emerge from the debates of that year came from Bob Sheheen — the former speaker, and Vincent’s uncle.

He suggested doing away with the physical, cloth flag altogether, and placing a modest bronze monument somewhere on the grounds to say that the flag once flew here over the dome, and giving some historical perspective.

Unfortunately, that proposal was never really given a chance. The infamous compromise came out of the Senate and then-Speaker David Wilkins allowed only one day — one day — for debate, thereby ensuring that no other proposal would have a chance to catch on and win support. Pressed for time, the House just passed the Senate plan, and moved on.

That day was one of the most frustrating of my professional life. This was before blogging, and The State’s online presence was pretty rudimentary. All day, I kept writing different versions of an editorial based on what was happening in the debate, hoping that Wilkins would allow the debate to continue another day, hoping to have some influence on the outcome — hoping for the chance to push for the Sheheen plan or something like it.

But they pushed on late into the evening, and I had to let the page go without any editorial on the subject, since I didn’t know what the facts would be when readers saw the paper in the morning.

So frustrating. Such a missed opportunity…

19 thoughts on “Not only was the flag not always there; neither was the monument”