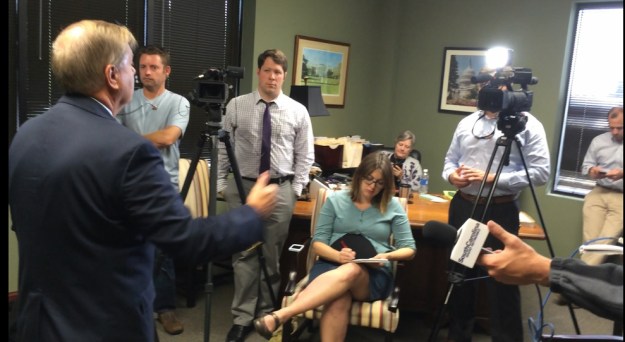 This is less of a revelation to SC media — or should be.

Some national writers are taking greater notice of some of the reasons why I’ve always been happy to endorse him.

In a piece headlined “The most interesting presidential candidate you’re not paying any attention to,” Chris Cillizza of The Fix noted that Graham stands out in ways other than the fact that he’s never been married (which has also been getting him some ink).

After noting all the usual horse-race stuff that has Graham well out of the running, Cillizza shares a reason why he should be a contender:

Okay, fine.  But if you stop and actually listen to some of what Graham is saying — particularly on the subject of bipartisanship — you realize that he’s one of the most interesting candidates in the field and one of the few who can genuinely sell himself as a change agent.

Here’s Graham answering a question from “Meet The Press” host Chuck Todd about how he would address political polarization in Washington:

I think there’s a market for a better way. When I talked to that young guy there, I said, you’re going to have to work a little longer, pal. If I’m president, I’m going to ask you to work a little bit longer. What do people do between 65 and 67, they work two years longer. Ronald Reagan and Tip O’Neil showed us what to do. I’m making a bet here. I’m making a bet that you can talk about problem-solving in a Republican primary and still get the nomination. I’m making a bet that you can openly embrace working with Democrats and still get the nomination. I’m making a bet that with a war-weary public, you can rally them to go over there and keep the fight over there before it comes here. Now, if I lose those bets it doesn’t mean America is lost, it just means I fell short. To a young person in politics, listen to what I’m doing here and see if it makes sense to you. There is a growing desire by the public at large to stop the B.S. I feel it, I sense it, and I’m running on the idea that if you elect me, I’ll do whatever is necessary to defend the nation. I’m running not as a candidate for a single party but for a great nation.

If you believe the American people when they say they want leaders who are willing to work with one another and take positions because they believe in them not because the policies are popular, it’s hard for me to imagine a better message than that paragraph from Graham above…

Yep. We know that about him. And some of us like that about him, and count ourselves lucky to have him representing us in Washington.

After pausing to recite yet again how slim our senior senator’s chances are, the piece concludes:

To me, though, Graham’s candidacy is a sort of campaign thought experiment: What if politics produced a candidate that had lots and lots of what the public said it wanted but in a somewhat unlikely package (a Southern-drawling lifetime politician) and without the buzz and fanfare that surrounds the so-called “top tier”?

Could a candidate like that possibly hope to break through?

It would be nice to think so.