OK, the really nutty stuff is starting now, with Clementa Pinckney not even in the ground yet.

I just watched the Sons of Confederate Veterans presser on WIS, and I have never in my life seen anyone so completely delusional as this guy who spoke, identified as “Commander” Leland Summers.

The essence is that, as he looks around him at the miraculous things that have happened in the last few days, he sees the precise opposite of what sane people see: Instead of the unprecedented unity and reconciliation that we’ve all seen between black and white, Democrat and Republican, he sees the “race war” that Dylann Roof wanted.

He says that if Roof is seeing any of what’s happening, “He laughs in our faces,” saying “‘Look what I did!'”

I watched the thing live, not having had time to get over to the State House myself. I hope they’re keeping a recorded up to where you can go watch it, because you will witness a technological miracle — somehow, WIS managed to transport a TV camera to an alternative universe, and transmit the video back to this one. First Netflix, now this.

It’s a universe where up is down, right is wrong, left is right. I always thought the Superman comics devoted to the Bizarro world were pretty silly, but we just saw video transmitted from that planet.

And it’s just one completely backward statement after another. For instance, he says “If Sen. Pinckney were here today, he would call for peace and unity,” instead of what we’re seeing.

But fella, that’s exactly what we are seeing. We’re seeing the most profound, heart-warming, soul-enriching display of peace and unity that I ever hope to witness this side of heaven. Where Have You Been?

He calls these magnificent developments “cultural genocide,” saying, “The United States of America is killing itself from the inside out.”

Cue the theme music from “The Twilight Zone.”

If there’s anyone left out there unconvinced that the flag needs to come down — and I know that with Glenn McConnell on board, there can’t be many of you left — please watch this stunning performance, as soon as the recording is available (I’ll embed it here once I see it). You will see just how confused, messed-up, inarticulate, sputtering and irrational the folks who still want the flag to fly truly are. And unless you’re pretty messed-up yourself, you won’t want to have anything to do with that. 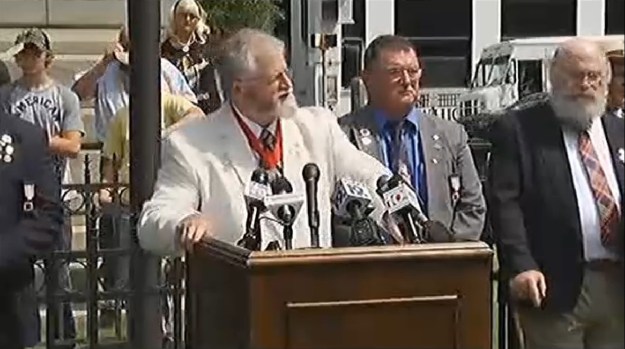 49 thoughts on “SCV presser: The most dramatic example of the human capacity for self-delusion that I have ever seen in my life”