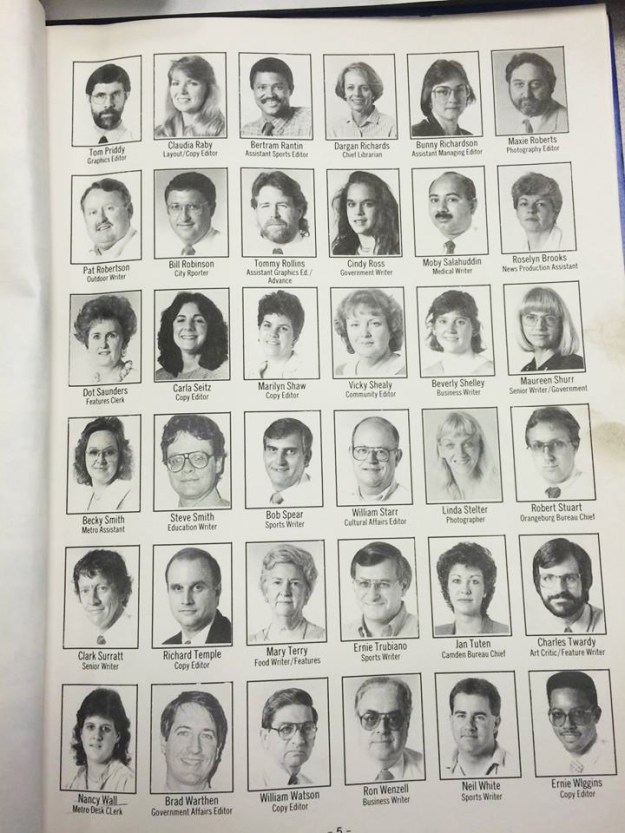 Cynthia Hardy isn’t the only one remembering when.

Susan Ardis at The State posted some pages from an old newsroom directory from the late 1980s on Facebook. I got tagged because mine is one of the mugs featured.

On this page, you can find all sorts of familiar names and faces. There’s Cindi Ross, before she was Scoppe. She was such a baby (only 23 when I became her editor). There’s Clark Surratt, who comments here frequently. There’s Neil White, who left in the most recent buyout. And there’s Bill Robinson, who opted to go in the first buyout round, several months before Robert and I were laid off.

Even though this page just covers from Priddy to Wiggins, there are almost as many people as there are in the whole newsroom today. Today, there are two people listed as covering government and politics, total (although some others sometimes do). On this one page, I count six of us — aside from me, there’s Bill, Cindi, Maureen Shurr, Steve Smith and Clark. There were about five others, in those halcyon days right after the Record had closed and we had combined the staffs — Lee Bandy, Charlie Pope, Jeff Miller, Scott Johnson and Bobby Bryant. And Clif Leblanc at one point. I don’t think I had all of those people at the same time, but all were on the gov staff at some point in that period. And once, at the height, I did have 10 people.

We could flat cover some gummint in those days.

Oh, and don’t forget to check out Mike Miller, back before we were doubles.

The employee directory was a handy thing to have in a newsroom with 150 or so people.

Later, this sort of thing disappeared. When I was editorial page editor, I was frustrated that while I knew most of the news people, in other departments of the paper were hundreds of people who knew who I was (not because I was so popular, but because my picture was in the paper all the time), and I didn’t know them. Which can be socially awkward:

So I nagged and begged and harangued our HR person for a picture directory. I knew pictures existed of all employees — for their IDs — so how hard would that be? An electronic one on the intranet would do. But she kept saying no dice, because of some kind of fear in the HR world that having such directories around would lead to sexual harassment or something. Which seemed odd to me — wouldn’t a harasser be more likely to harass in person, instead of via a picture? But never mind, this concern was all the rage in the HR universe, and we were not going to publish such a directory.

But finally, she got fed up with my griping about it, and had someone compile a looseleaf directory just for me. Just that one copy, eyes only to me. I felt like C, the head of MI6, and the only one allowed to see the NOC list.

I consulted it frequently, and it came in quite handy. And ne’er did I harass a single fair maid.

8 thoughts on “Back in the day, when we were all quite young”