“They’re back and they’re bad!”

“When they get together, Trouble comes a-runnin’!”

“Confederate Agenda II: Just when you thought it was safe to read the paper again…”

I’m thinking taglines for a cheesy sequel buddy action flick after seeing the page today in The State with Robert Ariail paired with me once again — my column with his cartoon. A lot of friends have commented on that — favorably. Although when Mike Fitts said it was “Just like old times,” Neil White, being himself, responded that “they were celebrating Throwback Tuesday over there.”

Anyway, it’s great to be back with Robert in print today, even though it’s only today. And to be back with Cindi Scoppe, of course. I’ve been working with her off and on since the weekend, strategizing about what I was going to write and the best time to run it, then working together through the editing process. And I was aware that she was writing two editorials that would run with my piece — this one congratulating the Senate, and this one exhorting the House to follow the Senate’s example — whereas Robert’s cartoon was more of a nice surprise.

Now that was even more like old times. I haven’t even seen my buddy Robert this week, but working on this with Cindi was a very pleasant return to the alternative universe where everything is as it should be.

I even called her to ask for a PDF of the page today, to have a souvenir of the occasion (nowadays, things don’t seem real without a digital version). An inferior JPG image is above. Click on it, and you get the PDF. 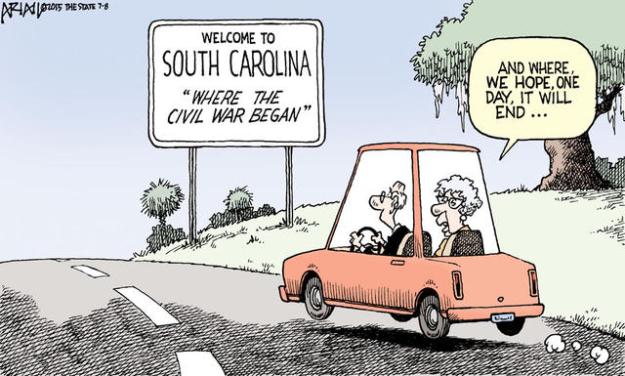