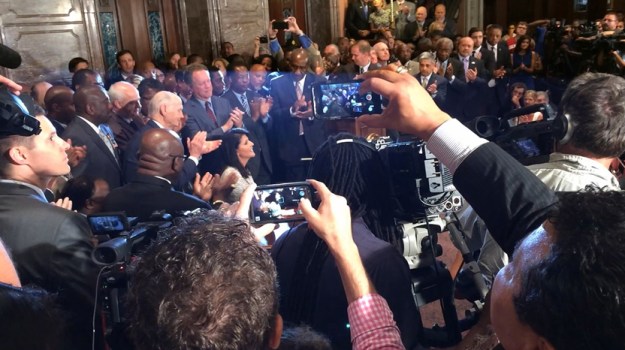 I wasn’t actually seeing this. My phone, held high above my head, did.

It helps to make new friends at just the right moment.

As I arrived at the State House a few minutes before the appointed time for Gov. Nikki Haley to sign the bill removing the Confederate flag from the grounds, I realized I should have come a lot earlier. Anyone with a brain should have known this would not just attract media types and pols who want to get into the picture. I had to stand a couple of minutes in a queue of regular civilians before I could even get into the building. But it was a happy, friendly group to hang out with.

My friend Valerie Bauerlein had joined the queue just as I made it through the metal detector, and I waited for her. But then we had trouble — both stairways up to the lobby were blocked by uniformed guards. They said the lobby was at capacity and nobody else could come up. I told them Valerie was from The Wall Street Journal and had come a long way, but no dice. Same story at the elevator.

So I went over toward the corridor to the governor’s office, where a bunch of dignitaries — also behind guards. I saw my representative, Kenny Bingham, and tried calling on his cell. He must have had it turned off. Then I saw Nathan Ballentine. “Nathan!” I called, to no avail. Just then, Rob Godfrey, the governor’s press guy, came over to tell me how much he had liked my column yesterday, in which I said nice things about the governor. (He had earlier said obliging things on Twitter.)

I thanked him, told him of our predicament, so he went and found a senior security guy, and suddenly it was OK for two more people to ascend the stairs.

So you see, sometimes it pays to make nice to the governor. You know, when it’s warranted. (Kidding aside, I’m as proud as I can be of her these last couple of weeks, as I’ve mentioned previously.)

At this point, you’re wondering when I’m going to get to the part about the signing ceremony. Well… here’s the thing… Once Valerie and I got up there, we found we couldn’t get within five or six people of the rope line around the spot where the signing would take place. Not only were there more media than I’ve ever seen at once in the State House (more than the presser a couple of weeks ago, WAY more than Mark Sanford’s confession in 2009), but there was an equal number of dignitaries crowding the place, plus a mixed concentration of lobbyists, staff people and the aforementioned regular citizens.

We all would have been better off watching it on a video feed, in terms of seeing or hearing anything. There was no P.A. system, and about the only things I heard the governor say was something about the flag coming down — which drew a cheer — and then her patented line about it being a great day in South Carolina, followed by more cheering, because this time, everybody agreed with her. In fact, I may start saying it when I answer my own phone.

But as little as I saw or heard, I wouldn’t have missed being there. So thanks, Rob. I mean, nobody could hear George Washington’s inaugural address, because he mumbled. But wouldn’t you like to have been there?

Beyond that, well, I’ll share the bits and pieces of what I was able to witness below: 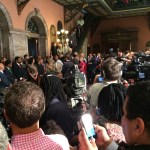 Another view of the crowd. It was just impossible to get closer. 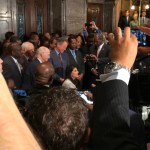 Hovering over the present governor are former governors Jim Hodges, Dick Riley and David Beasley. She gave each of them one of the pens used in the signing. 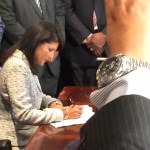 The best shot I was able to get of the signing itself. Sorry. 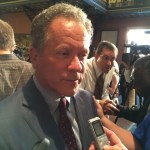 David Beasley, being interviewed by John Monk. He seemed thrilled that the flag that had cost him his job was coming down. 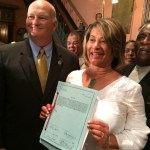 I believe this is Wanda Bailey, Strom Thurmond’s granddaughter, holding the bill after the signing. A bunch of people lined up to have their pictures taken with it and Secretary of State Mark Hammond, left. 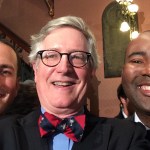 People were kind of giddy. Here’s my selfie with the state party chairs, Republican Matt Moore and Democrat Jaime Harrison. 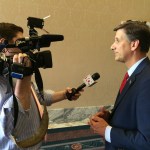 Vincent Sheheen, author of the bill, was doing one interview after another. 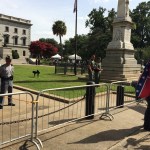 When I left, the entire area around the flag was fenced off and heavily guarded, preparing for tomorrow. 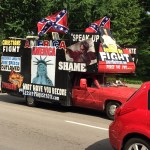 This guy was cruising Gervais. I’ve seen him a couple of times this week.

14 thoughts on “It’s a great day in South Carolina, and tomorrow will be even greater”