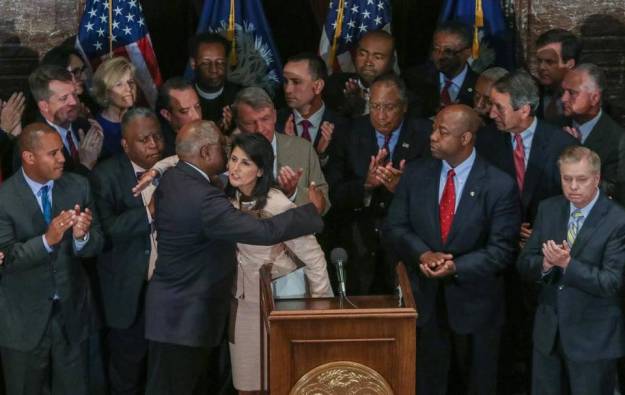 We have come so far. We are so close. Let’s get it done.

That’s the litany I’ve been reciting this past week, as the previously unthinkable quietly became a matter of fact — at least in the S.C. Senate. To paraphrase a T.S. Eliot quote that Sen. Tom Davis cited after the Senate vote: This is the way the Confederacy ends; not with a bang but a whimper.

We now live in a new South Carolina. No, the flag’s not down yet, but the South Carolina I’ve known all my life is gone. In that late, unlamented version, that anticlimactic 36-3 vote in the Senate would have been impossible. And yet in this new world, it was so … matter of fact. Poetry aside, there wasn’t even a whimper.

How did we get here? Well, I wasn’t around for the start. But while some scoff at the ostensible reason for putting the flag up there — to mark the centennial of The War — I find it credible. I was in the second grade in New Jersey when the centennial observances began. Navy blue kepis — the hats we identify with the Civil War — were very popular among the kids who mocked my South Carolina accent. I searched everywhere and found a gray one. I wore it to school, daring the other boys to try to knock it off.

Innocent enough. But the centennial ended in 1965, and the flag stayed up. We know why. By that time, the civil rights movement was winning important national victories.

And what did the flag mean? We know. Oh, news reports will affect that priggish, pedantic neutrality peculiar to the trade: “Some people see the flag as meaning this; some see it as meaning that.” But we know, don’t we? It is a way white South Carolinians — some of us, anyway — have had of saying that, despite Appomattox and the civil rights movement: We can do this. We don’t care about you or how you feel about it.

It was a way of telling the world whose state this is.

My own involvement with the flag started in February 1994, about six weeks after I joined The State’s editorial board. I hadn’t planned to write about it. But my colleague Lee Bandy had asked then-Gov. Carroll Campbell about the flag. The governor had dismissed the issue as beneath his notice. He was too busy with the “big picture” to fuss about with such “temporal emotions of the moment.”

Carroll Campbell did a lot of fine things as governor, but on that day he really ticked me off. So I ripped out a short editorial — just 349 words — that said if the governor was serious about national ambitions (and he was), he needed an attitude adjustment. The “emotions” to which he referred arose “from a failure to resolve the central crisis of our history. That failure arises from many causes, but one of them is a lack of leadership. The rest of the nation can be expected to have little patience with a man who seeks to lead it into the 21st century, but can’t make a gesture to lay a 19th century conflict to rest.”

From that moment, I couldn’t leave the issue alone. I berated a series of governors, and Legislatures, on this failure of leadership. And what result did I, or anyone else calling for the flag to go, get? A hardening of attitudes. The Republican Party rose to power in the General Assembly after putting a mock flag “referendum” on its 1994 primary ballot, after which legislators moved to enshrine the flying of the flag into law.

The anti-flag movement grew, and reached its zenith in 2000, with a 60,000-strong demonstration on Martin Luther King Day, and a dramatic march from Charleston to Columbia led by Mayor Joe Riley. And still, what did we get? A “compromise” that moved the flag to a more visible location. After which the Legislature made it clear for 15 years that it had zero interest in revisiting the issue.

But that all happened in the old South Carolina, which ceased to exist not the night that Sen. Clementa Pinckney and eight of his flock were murdered in cold blood. It ended two days later, when the families of the slain forgave the young man charged with taking their loved ones away.

The new South Carolina was born in that moment, in that courtroom. Hatred and death didn’t bring it into being. The love of the living did.

A chain reaction of grace started there, and its radiance shone forth from Charleston. The nation marveled: Why were they not seeing another Ferguson, another Baltimore? How can this black-white lovefest be?

A series of governors had, to varying degrees, brushed off the flag. (Although both David Beasley and Jim Hodges sought compromises.) And now here was one saying, without any mention of compromises, “It’s time to move the flag from the capitol grounds.” Period. God bless Nikki Haley for actively stepping out to lead this new South Carolina, a state that would be ashamed to engage in the games of the past — a state that couldn’t look at those victims’ families and respond any other way. A state that had grown up.

Standing behind her on that miraculous day, three days after the arraignment, was a cross-section of our political leadership — black and white, Democratic and Republican. The chairmen of the two parties, whose rivalry was defined by the division that flag represented, literally stood shoulder-to-shoulder.

Anything can happen now. Anything. Thank God. Now, on to the House.

Mr. Warthen is the former editorial page editor of The State and now director of communications and public relations at ADCO, a Columbia marketing agency. He blogs at bradwarthen.com.