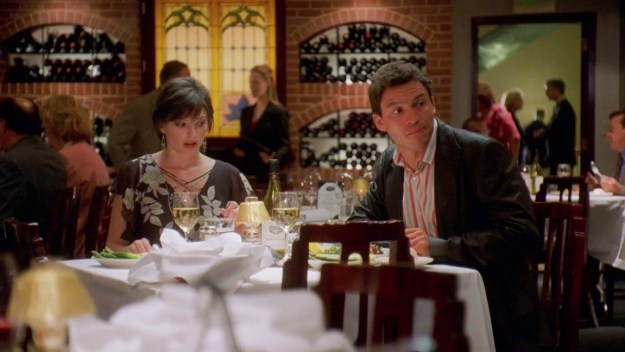 I love the look on Terry D’Agostino’s face as McNulty explains that he couldn’t be bothered to vote in the presidential election between Bush and what’s-his-name. (“Kerry,” she says helpfully.)

Sorry, but I couldn’t find video to embed of this one.

Previously, I shared my delight at the scene from the first season in which Rawls tries to comfort McNulty, whom he hates, while cussing him out. Wonderful device for deepening the viewer’s sense of these characters. (Later, there is further cause to be sympathetic to Rawls’ dislike of McNulty, as the latter repeatedly shows his disregard for the opinions and prerogatives of other bosses and colleagues.)

I’m in the third season now, and my fave so far is the one in which McNulty and Terry D’Agostino are for once having dinner together before jumping into the sack, and she learns how apathetic he is about politics — which means there will be no jumping into sacks tonight.

As the scene was summarized by HBO:

McNulty, slightly intimidated, has dinner with Theresa D’Agostino in a fancy D.C. restaurant. The more she learns about him — that he only has a year of college under his belt, that he is essentially an apolitical being who doesn’t know the difference between a red state and a blue state and who didn’t even bother to vote in the presidential election — the less interested she is in him. When McNulty takes her home, she doesn’t invite him in…

Yeah, there was some class stuff going on there. But I think she liked his rough edges. The deal-killer, the anti-aphrodisiac for her seemed to be the moment he said he couldn’t be bothered to vote.

I was watching her face, and that was when he lost her. Up to that point, he thought he had a really hot borderline nymphomaniac eating from his hand. As from that instant, I knew Jimmy was out of luck.

I’ve heard SO many people say the dismissive things McNulty was saying about politics. It was refreshing and fun to see such a person pay for his apathy, in terms he could appreciate…

2 thoughts on “My second favorite moment on ‘The Wire’”