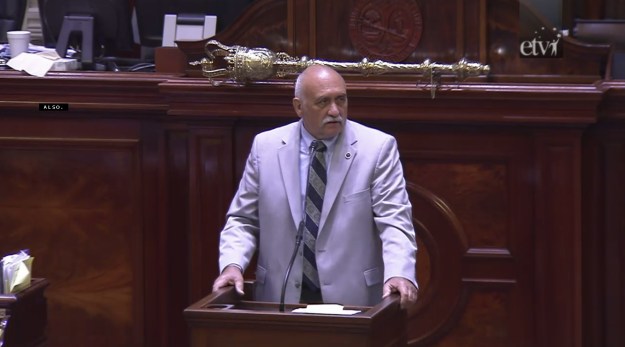 Rep. Mike Pitts, speaking in the House this afternoon.

This is a dangerous moment.

More than two weeks have passed since that magnificent moment of unity and purpose in the lobby of the State House. And after that moment of clarity and understanding about what the Confederate flag, flying in front of our seat of government, actually means, some House members have had time to revert to habitual modes of thinking.

And to start acting on them. Which is why there are proposals in the House to do things that would make removing the Confederate flag meaningless — by proposing to replace it with other symbols supposedly meant to honor their ancestors (or, to take this one and fly it at the State Museum). While, of course, giving everyone else’s ancestors the backs of their hands.

Worse, the state of South Carolina would be the entity giving the back of its hand to the rest of the world, and especially to those whose ancestors were slaves in this state.

What is it with these people that they can think, or even pretend to think, that a public space is meant for them to honor their personal family trees?

An approach like what they are talking about is in no way, shape or form a “compromise.” It would be their way of winning again, of continuing to have it all their way. Which is what they have so much trouble letting go of.

The “heritage” argument is so bogus that I feel foolish taking time to refute it — but it’s on my mind because a House member I don’t recognize is going on and on about that nonsense right now, on the video feed.

As I said in my column this morning, there is only one way to see that flag (or a substitute also meant to “honor” some people’s ancestors) flying in that place:

And what did the flag mean? We know. Oh, news reports will affect that priggish, pedantic neutrality peculiar to the trade: “Some people see the flag as meaning this; some see it as meaning that.” But we know, don’t we? It is a way white South Carolinians — some of us, anyway — have had of saying that, despite Appomattox and the civil rights movement: We can do this. We don’t care about you or how you feel about it.

It was a way of telling the world whose state this is.

And any “solution” that continues to fly anything there to honor anyone’s ancestors at the cost of insulting other people’s is completely out of the question. If the House is going to do that, it should just adjourn and go home now.

Because anything short of what the Senate has done — passing a bill that brings us together as ONE people, no longer dividing us by honoring some people’s separate version of reality — will accomplish anything.

All a “compromise” will do at this point is guarantee that we’ll still be arguing about this 15 years from now.

And no sane person wants that.

Don’t go by me, though. Read Cindi’s editorial on the subject today.

77 thoughts on “No more flags, no more pole, no more ‘compromises’ that are anything but”