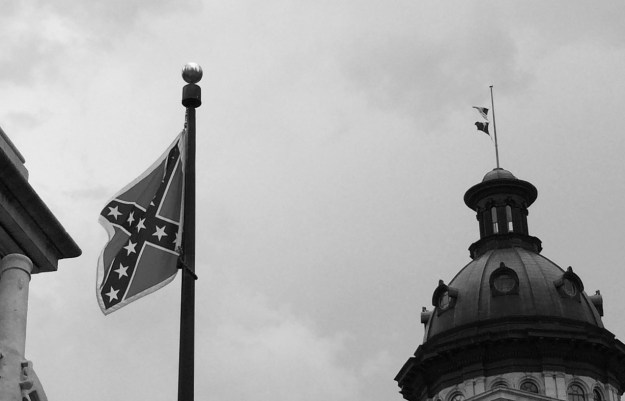 OK, it’s technically only 349, which is amazingly terse, considering the thousands — probably hundreds of thousands — of words I would eventually write on the subject.

I make a reference to this piece in my column in Wednesday’s editions of The State. I thought I’d share the whole thing with you.

It was February 1994. I had only been on The State‘s editorial board for six weeks. One morning, I read in our paper where my friend and colleague Lee Bandy had asked then-Gov. Carroll Campbell about the Confederate flag that then flew over the State House, and saw how dismissive the governor had been of the issue.

Which I found to be outrageous.

So I quickly ripped out this very short editorial — what we called a backup, as opposed to a lede — and got it into the paper ASAP. (Actually, The State has the first backup that I’ve seen in awhile on the page with my column.)

I hadn’t thought all that carefully about the flag up to that point. The fact that it should come down seemed obvious to me. But in reading this you can see I had not yet developed the themes that would be central to my writing about the flag later. You’ll see that I emphasize South Carolina’s image to outsiders, which has not been an important theme to me since then. I mainly did that because it was believed that Campbell harbored presidential or vice-presidential ambitions, so I seized on that to at least give him reason to think harder about the issue.

Here is the editorial:

THE ever-careful Carroll Campbell is taking an interesting gamble by not taking a stand on flying the Confederate battle flag atop the State House.

As Governor Campbell cautiously nurtures ambitions for the national stage, this issue could prove to be his Rubicon. If he crosses it, he risks alienating a chunk of South Carolina voters. But crossing it could be a way of gaining the national credibility necessary to his ambitions.

Increasingly, the flag is a human relations irritant even as we confine our gaze inward. And it is a problem for Southerners each time we reach out to the world. This happened with Georgia as it looked toward the Olympics, and Alabama as it worked to lure Mercedes-Benz.

As Mr. Campbell gazes outward, he should see that he ought to issue a call to bring the flag down, and he must do it now. He will have no standing to address it next year, when he will be asked why he avoided the issue as governor.

To say, as Mr. Campbell does, that the flag has to do with little more than “temporal emotions of the moment” is absurd. These emotions arise in turn from a failure to resolve the central crisis of our history. That failure arises from many causes, but one of them is a lack of leadership. The rest of the nation can be expected to have little patience with a man who seeks to lead it into the 21st century, but can’t make a gesture to lay a 19th century conflict to rest.

We’re not saying it would be easy. We’re saying that the effort would be worthwhile, particularly if the flag is placed in an appropriate historical display. The Governor has gained a considerable store of political capital in the past seven years; this would be a good way to invest some of it.

By having the guts to deal with this problem constructively, he will have shown himself worthy of the national stage. And he will have done an enduring service to his home state.

Anyway, that was the start of my 21 years of writing on the subject. And soon, maybe, maybe I’ll be done.