This is an extraordinary clip, which I thank Norm Ivey for bringing to my attention. HuffPost sets it up this way:

When Sen. Lindsey Graham (R-S.C.) celebrated his retirement from the Air National Guard last week after 33 years of military service, he was greeted at the ceremony by an unexpected guest: Vice President Joe Biden.

Though they hail from opposing parties, Graham and Biden have long had a close friendship, going back to their years serving together in the Senate. The South Carolina senator and 2016 Republican presidential candidate was particularly touched that the vice president attended his military sendoff.

Over the weekend, The Huffington Post spent a day with Graham on the campaign trail in Iowa for the latest installment of our original series, ’16 And President. We’ll have the full episode up next week, but the above clip is a short preview of what’s to come….

In it, our senior senator chokes up talking about Joe Biden, about whom Graham says:

If you can’t admire Joe Biden as a person, then it’s probably… you’ve got a problem. You need to do some self-evaluation. What’s not to like?… He’s THE nicest person I think that I’ve ever met in politics. He is as good a man as God ever created…

This is one of the more touching illustrations I’ve seen of my oft-stated thesis that politicians — despite what you may firmly believe — are people, and not monolithic representations of good and evil, as most partisan rhetoric would have it. 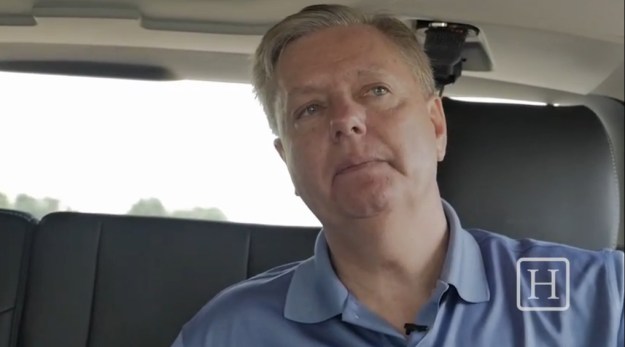 8 thoughts on “You MUST watch this video, in which Lindsey Graham gets choked up talking about his friend Joe Biden”