Does Steve Spurrier actually earn, in any moral sense, the more than $4 million he is paid as an ostensible public employee? Or is the $7.2 million that Alabama coach Nick Saban pulls down justified?

Former Alabama President Robert Witt (now the chancellor of the Alabama university system), once told CBS’s “60 Minutes” that Mr. Saban was “the best financial investment this university has ever made.” He has a point. 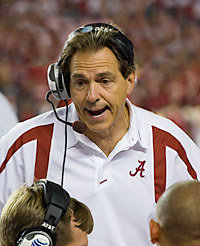 Mr. Saban had an immediate financial impact on Alabama. In 2007 the school was closing a $50 million capital campaign for its athletic department. After Mr. Saban arrived, the campaign exceeded its goal by $52 million. Alabama’s athletic-department revenue the year before Coach Saban showed up was $68 million. By 2013-14 it had risen to $153 million, a gain of 125%. (The athletic department kicked $9 million of that to the university.) Mr. Saban’s football program accounted for $95 million of that figure, and posted a profit of $53 million.

Mr. Witt said Mr. Saban also played a big role in the success of a $500 million capital campaign for the university (not merely the athletic department) that took place around the time the football coach was hired. Mr. Witt also credited his coach with helping grow Alabama’s enrollment—which stands at more than 36,000, an increase of 14,000 students since 2007. The university managed the neat trick of actually becoming more selective during that time. The year before Mr. Saban arrived, Alabama accepted 77% of its applicants. It now admits a little more than 50%. Mr. Saban’s three national titles at Alabama have helped the university create a winning brand….

Of course such an argument can be mounted for anyone whose hand rests on the money tap that is college football.

But in a larger sense, it’s completely absurd to say that anyone earns that much money supervising a bunch of ostensible students in doing something that has nothing to do with their studies — playing a game. When I say “larger sense,” I mean the view from 30,000 feet — the distance I try (unsuccessfully) to maintain from anything having to do with college football.

But hey, let’s keep it on a simple dollars-and-cents level (as if anyone counts cents any more): Who earns that money that flows into the program’s coffers? The coach or the players? In the NFL, top players make more than the coaches — which makes sense, when you consider who is actually out there courting brain damage and other forms of permanent injury. But am I arguing, as many do, that college players should be paid in accord with the profits they bring in?

No, I’m not. College kids getting paid millions to play a game is more or less as absurd as the coaches getting paid that much. In fact, I have no suggestions, because the problem is far too pervasive, complex and systemic to lend itself to any workable solution.

The problem isn’t that colleges are wasteful in paying coaches this much. The problem is that football brings in this much money. In other words, the problem is that we live in a society in which people value college football to a degree that is far beyond the power of the word “absurd.” And the result is, as the headline I reTweeted a week ago says:

College football isn’t about college, and it’s barely about football. It’s about money. via @washingtonpost http://t.co/GmI0xoDJKn

Who is to blame? Pretty much everybody I see when I look around me, a fact borne in upon me at this time of year with all the subtlety of that trash compactor in the Death Star, its walls moving in to impartially crush Luke, Leia and Han.

Which reminds me. You know how much Mark Hamill, Carrie Fisher and Harrison Ford are being paid to reprise their roles? Well, neither do I, but … Oh, never mind…

41 thoughts on “Do college football coaches deserve their pay?”