About a decade or so ago, I persuaded one of my daughters to sit and watch “The Great Escape” with me. My motivation was that I wanted to share something that had been, without a doubt, my favorite movie when I was a kid.

Early on — I think it might have been the scene in which Steve McQueen’s character, Hilts, and his new Scottish friend Ives, are sent to the “cooler” for the first time — my daughter raised an objection: What’s with the light, sprightly music in the background? This is about men at war being held prisoner of the Nazis and risking their lives to escape. They’re being put in solitary confinement, a harsh punishment that can cause lasting psychological damage (and as we soon find out, has pushed Ives to the edge of cracking up). Why the cute music? Why does it seem the actors are playing it for laughs?

She knew that her grandfather had spent the rest of the war in such a camp after being captured in the Ardennes, and it was a sufficiently horrible experience that he never, ever wanted to visit Europe again.

I had never noticed that incongruity, because, well, I had first seen the film at the age of 10, and I thought it was awesome in every way, and had never questioned the out-of-place comical touches that, after all, made watching the film all that much more fun.

I tried to explain that films were different in the ’50s and ’60s — Hollywood tended to sugarcoat everything — and war films especially. The country had this hugely positive feeling about the Second World War, and over the past couple of decades had sanitized it to the point that, to kids of my generation, it looked at times like one great lark. I knew at least in theory of the cost of war — I used to look at those pictures of American bodies in the surf at Normandy and Saipan in the big Time-Life picture books about the war. Still, the fact that the war was something we all felt good about was something I didn’t question. For instance, I watched the film starring Audie Murphy in which he re-enacted the deeds that made him a hero, and nothing that I saw in the film prepared me for what I learned years later — that Murphy had a terrible time with PTSD after the war.

And I knew, by the time my daughter pointed out that problem, that the true story of The Great Escape had definitely received the Hollywood treatment. To begin with, Hilts was complete fiction, and although there were some Americans in the camp, their roles in this escape were fairly marginal. (I think. I’m finding some contradictory info about American David M. Jones.)

Still, even though I know all that, and even though the film doesn’t hold the exalted position that it did in my personal list of favorites, I got a little defensive this morning when I read about the death at 101 of the next-to-last survivor of the escape, Australian Paul Royle. This was the part that got me:

Paul Royle revealed last year on the 70th anniversary of the tunnel escape in March 1944 that he was no fan of the Hollywood interpretation of the story.

“The movie I disliked intensely because there were no motorbikes … and the Americans weren’t there,” he told Australian Broadcasting Corp., referring to McQueen’s dramatic bid to outrun the Germans on a motorbike.

Gordon Royle said his father was angry that Hollywood would create an adventure out of soldiers doing their often tedious and dangerous duty of attempting to escape.

“He felt the movie was a glamorization of the tedium and the drabness of the actuality,” Gordon Royle said.

“The idea that they got on a motorbike and soared over a barbed wire fence is far from the reality, which was darkness and cold and terror,” he said….

First, Mr. Royle had a million times greater entitlement to an opinion on the film than I ever will have. That said, allow me to raise some objections to his criticism: 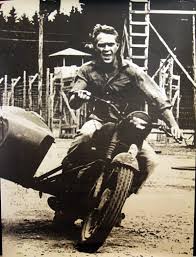 As a kid, I had this poster on the wall in my room.

In the end, it’s hard to defend the role Steve McQueen played in the film — except in this convoluted way: His jump over that fence at the Swiss border on that German motorcycle was the most exciting thing I had ever seen in a film to that point in my life, and the one thing that solidified it as my favorite. Yes, it was a complete lie. But it engaged my lifelong interest in the escape, and caused me to read books about the true story later in life.

So in that regard it served a purpose. Although I can easily see how a man who suffered through the actual experience would find it irritating in the extreme, and I’m sorry for that. He certainly has the facts, and all the moral weight, on his side. I just thought I’d speak up for something that meant a lot to me as a kid.

23 thoughts on “In defense of “The Great Escape””