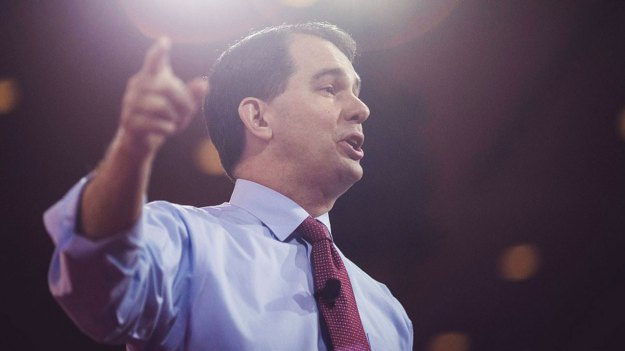 I’m using this photo from Scott Walker’s website not because it particularly goes with this post, but to help y’all get used to seeing him: If I were to write a post headlined, “Top Five GOP Presidential Candidates I’d Have Trouble Picking Out of a Police Lineup,” he’d make the list. And it occurs to me that maybe some of y’all would have the same problem. Or maybe not. Other people watch more TV than I do…

Scott Walker is in hot water again — with Democrats, anyway, which probably isn’t keeping him up nights — for expressing something short of 100 percent certainty on whether POTUS is a Christian:

“You’re not going to get a different answer than I said before,” the Wisconsin governor said. “I don’t know. I presume he is. … But I’ve never asked him about that. As someone who is a believer myself, I don’t presume to know someone’s beliefs about whether they follow Christ or not unless I’ve actually talked with them.”…

Walker wrapped up his answer by saying, “He’s said he is, and I take him at his word.”…

OK, yeah, I get it. Obama is a special case. Expressing anything short of total acceptance of his avowed Christianity hints at birtherism. Dog whistles and all that.

But… suppose for a moment that Walker said that about any one of the other 7 billion and something people on the planet. In those cases, I would say his caution was entirely defensible.

This interests me for reasons totally unrelated to Barack Obama and the paranoid fantasies about him to which some fringe folk subscribe. It has to do with the proper use of the word “Christian.”

I’ve always felt a little uncomfortable myself answering the question, “Are you a Christian?” Not because of the denotative meaning of the word — one who professes belief in Jesus Christ and his teachings — but because of the connotations that attach to it.

Once, it was used among English speakers to mean something like “normal,” or civilized. For instance, the historical novelist Patrick O’Brian would put it in the mouths of his Regency Period characters when they were talking about the normal, proper way of doing a thing. The physician Stephen Maturin, despite years at sea, remains such a landsman that he can’t climb the rigging the way seamen do and must ascend to the top through the “lubber’s hole.” So his friend Jack Aubrey might speak of his inability to get up there “like a Christian.” Aubrey, who is just as incompetent on land as his friend is at sea, is a terrible gardener, so his rose bushes do not resemble “anything planted by a Christian for his pleasure.”

That sense has gone out of favor. Most people would find it confusing today, and like as not take offense at it.

Nevertheless, many English speakers today seem to use the word as a sort of honorific, as something describing a person who has arrived spiritually. This is most common among those who are in the habit of describing Christians as people who are “saved,” as opposed to people who are merely striving to follow the teachings of the carpenter/rabbi from Nazareth.

If I was sure everyone understood it in that striving sense — as describing someone who believes, and wants to live up to the standards set by the teachings of Jesus, and tries to do so — then I’d be perfectly comfortable telling one and all that I am a Christian. Or at least, attempting to be. (After all, I must ask myself always, am I even a Christian in the sense of striving? Am I really trying hard enough to qualify?)

But I fear they may take it the other way, as some sort of self-congratulation on my part — which to me would be contradictory to the whole belief system. In other words, if I said “yes” without mixed feelings, would I be disqualifying myself?

Anyway, if Scott Walker or anyone else says he can’t know whether I am truly a Christian, I’ll congratulate him on his humility in admitting he doesn’t know something he lacks the power to truly know, since it’s a point upon which I can even confuse myself.

But then, I’m not Barack Obama.