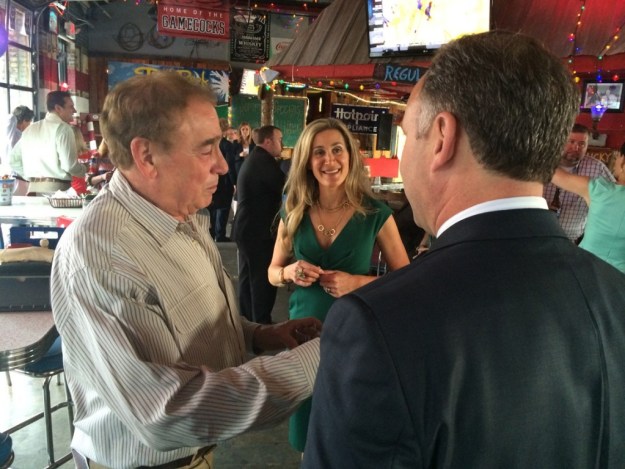 Beth Bernstein at her campaign kickoff last year, with the back of Joel Lourie’s head in the foreground at right.

Well, it looks like Joel Lourie’s departure from the S.C. Senate won’t produce a Democratic primary contest between two House incumbents. Mia McLeod is going to run, but Beth Bernstein is not:

Bernstein: How I Can Best Serve
Columbia, SC – State Representative Beth Bernstein released the following statement in regards to a possible bid for Senate District 22, currently held by Joel Lourie, who announced last week that he won’t run for re-election.
“Leadership.  An interesting concept and one not easily grasped.  In fact, I just concluded a 2 year-long course on this same topic through the Aspen Institute’s prestigious Liberty Fellowship Program.  In this program, we studied different leadership styles, philosophers such as Aristotle, Plato, and Hobbes, and instrumental leaders such as Martin Luther King, Jr., Ghandi, and Margaret Thatcher, among others.  What I learned and what I am still learning is a good leader has to make tough decisions, not rash decisions but well studied and thought out decisions.

Last week, my state Senator Joel Lourie announced that he would not be seeking re-election in 2016.  For our community and state, he has exemplified the qualities of a great leader.  He will be sorely missed and we will suffer a great void without him, but while I know this decision must have been a difficult one, it was one that was not made in haste.  And I thank him for the incredible sacrifices that he has made for our community.

With his departure came the likely inquisition on whether I would seek to run for his vacant seat.  While I wish he was given at least one day before any announcement was made to replace him, allowing him the respect and deference deserved for a career of public service coming to an end, I felt pressure to quickly make a decision.  Although, I personally needed time to study and determine if filing for Senate District 22 would be the best decision for my family and me and the community that I love and cherish.

After much prayer and personal reflection, my conclusion is that while serving in the Senate would be an exciting opportunity, I believe my recent appointments to the House Judiciary and Ethics Committees allow me to be more effective in representing this community in the House of Representatives. Therefore, at this time, I do not intend to file for Senator Lourie’s vacant Senate seat.

I am able to effect positive change for my constituency through the legislative process, and I believe I can make a bigger impact for our community by continuing to serve in the House.  Many of the bills that I have co-sponsored this year have passed, including the Cervical Cancer Prevention Act, of which I was the primary sponsor.

I feel so privileged and honored to be able to serve our community at the Statehouse and intend to file for re-election for House District 78 in March.  I want to continue advocating for our public schools, road funding and ethics reform, as well as fighting for women’s health issues, the elderly, and children’s issues.  I hope you will continue to support me.”

So, was that a dig at Mia? I refer to the part that said, “I wish he was given at least one day before any announcement was made to replace him.” Yeah, that was kind of a dig at Mia. I think…