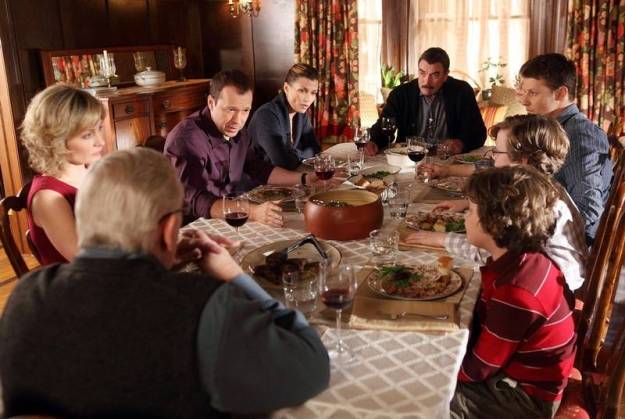 The Reagans, having another civil debate over Sunday dinner.

For years, my parents would ask me if I’d ever seen the cop drama “Blue Bloods,” and when I said I hadn’t, they urged me to check it out. They love it.

Eventually, in casting about this year for a new series to get hooked on after running out of “The West Wing,” I tried it. And I loved it, too, probably for a lot of the same reasons they do. And I’m kind of sad that this morning during my workout, I ran out, watching the last episode that is available so far on Netflix.

Part of it is probably that it bucks the trend, set by shows as varied as “Mad Men,” “Breaking Bad” and “Game of Thrones” — all of which lack so much as a single admirable character to root for. While every recurring character on “Blue Bloods” is human and fallible, each of them has enough to like and respect and even admire that you just want to spend more time with them. I mean, I loved “Breaking Bad,” but sometimes you want to see some people who might inspire you to break good for a change.

Another likely reason for the older audience is that everything about the show, from the central characters to the plots to the dialogue, fosters and celebrates traditional values such as family, loyalty, honor and duty. To some extent, these are the kinds of things I was talking about in 2008 in a column headlined “Give me that old-time conservatism” (as opposed to the kind that people like Mark Sanford and Rand Paul promote).

Oh, and there’s another traditional value the show celebrates: Respect for others, including those who don’t necessarily look at things the way you do.

That observation may be jarring to a lot of the people whose teeth are set on edge when you say “traditional values,” people who would define that as meaning some throwback to the bad old days (many seem to regard old days as bad by definition) when people who didn’t adhere to some norm were despised and put down.

But I don’t see it that way. I see a political environment today that has almost zero tolerance for varying opinions. Today, if you don’t agree with me, you are beyond the pale, a person without value, or worse, a person with negative value, one to be despised and condemned and reviled.

And I can remember when our politics weren’t quite that bad, when Democrats and Republicans were committed opponents, but more in the way fans of different football teams are, rather than as participants in a morality play in which there are only Good People and Bad People.

(Those earlier times had their own problems, of course. As I said on a previous post today, I don’t believe any previous generation was any better, or worse, than this one. People are always people, and each individual has his or her capacities for good and evil. We don’t have a moral advantage based on the time in which we are born.)

One of the ways “Blue Bloods” promotes this value is through the trope of the Sunday family dinner, as traditional an institution as one might find.

To back off and explain briefly — the show centers around the Reagan family. Not Ronald’s, but Frank’s. Frank Reagan, played by Tom Selleck, is the New York city police commissioner. His father, who lives with him (both of their wives are deceased), is the former police commissioner. Frank’s two sons are both cops — Danny a veteran detective, younger Jamie a graduate of Harvard Law School who gave it up to become a beat cop. Another brother was also a cop, but was killed in the line of duty before the show began. Sister Erin is an assistant district attorney.

So, when this clan gathers for Sunday dinner at Frank’s house, with Erin’s daughter and Danny’s wife and two sons, there’s a lot of shop talk, and it tends to center around some ripped-from-the-headlines issues such as police use of force and the like. And there is always a fairly wide array of perspectives, from the cops and Erin, and from Erin’s daughter and Danny’s wife. Danny is the hard case; Jamie is more the bleeding heart and rights-of-the-accused guy and so forth.

And while it gets contentious — in fact, there are dinners when one or another member of the family is giving one or all the cold shoulder over some current issue (say, Erin is at odds with the cops on whether a certain suspect should be prosecuted) — ultimately everyone loves and respects everybody else, and at least gives them the benefit of the doubt enough to listen. Even Danny, the hothead — usually.

But the respect-other-views thing runs through the whole show. Paterfamilias Frank, the commissioner who models himself on predecessor Teddy Roosevelt (right down to the mustache) might have one firm opinion, but the views of others are fairly represented.

I’m far from the only person to notice this. I like the way Mark Blankenship, a blogger at HuffPost, wrote about it when the series was young in 2010. I found this by searching on “Blue Bloods conservative,” to see how others reacted to the series’ traditionalism:

And although it’s never been stated, I’d wager that Danny would identify himself as a political and social conservative. Almost every episode of the show features a dinner table debate among the extended Reagan clan, and Danny always comes down on the ostensibly Republican side. He gets heated when someone suggests that drugs should be legal or that criminals should have inclusive rights, and he often chastises his brother Jamie, who left Harvard Law School to become a beat cop, for being an elite, Ivy League softie who doesn’t know how the real world works. In moments like this, I almost expect Danny to quote Sarah Palin.

But here’s the thing: Unlike the people who bloviate on cable news about their so-called conservative values, I’m actually willing to listen to Danny. His character is written and played with nuance, with flaws, and with admirable traits… so even though I might disagree with some of the things he says or does, I can’t dismiss him as a jerk, a lunatic, or a man who would like to see my rights as a gay man obliterated in the name of what’s good for America.

Meanwhile, that’s almost always how I see conservative candidates and pundits. They play to their base by underlining their most radical views, and their opponents play to me by underlining them, too. I’m left inside a system that boils everyone down, asking me to make quick decisions about right, wrong, good, evil.

And the truth is, it works. I try my damndest to live a thoughtful life, but after years of exposure to Tea Party vitriol, Red State vitriol, and Evangelist vitriol, I almost always assume that Tea Partiers, Red Staters, and Evangelicals wish me harm.

I know this is unfair. I also know that other people jump the same unfair conclusions about me. But I’m a person, you know? I can be influenced.

That’s why I find it almost spiritually refreshing to be presented with a character like Danny Regan, who is so different from me, but who still seems human. I see Danny sit at dinner with his family — some of whom are his political opposites — and I see him, I see all of them, talk to each other and listen to each other. Thus far, no one has changed anyone’s mind, but no one has been shamed away from the table, either.

Yes, it is a nice thing to imagine, and I thank “Blue Bloods” for helping us imagine it. I’m sorry I’m out of episodes, and look forward to the most recent season being posted on Netflix as well…

Traditional values: The Reagans, in keeping with the cop stereotype, are Irish Catholic. Oddly, in early episodes they got the words to the Catholic grace slightly wrong. It was corrected in later episodes.

22 thoughts on “‘Blue Bloods,’ a show that stands up for traditional values, such as… respecting each other”