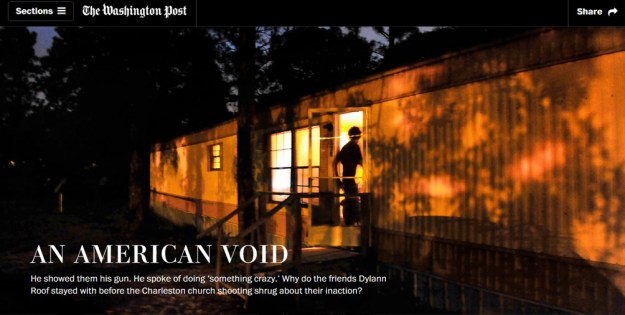 I initially saw this in The State this morning, although I’m linking you to the original piece in The Washington Post.

It’s a fascinating portrait of the Red Bank household in which Dylann Roof lived the last couple of months before the Emanuel AME murders.

Now, a month after the June 17 shooting, the blinds are drawn at noon and the family that hosted Roof is inside, where the boom of gunfire and explosions is so loud the trailer vibrates.

“Ha ha. I just killed all them mothers,” says Justin Meek, 18, playing a video game in which blood and body parts fly across a 42-inch TV screen….

On a lopsided couch is Lindsey Fry, 19, flicking her tongue ring, eyes locked on a cracked cellphone for news about the shooting, which has lately included her boyfriend Joey, 21, the third Meek brother who lives in the trailer, which is in a town called Red Bank that the Meeks call Dead Bank….

They are the people with whom Roof was associating in the weeks before the shooting, and this is the place he drifted into with little resistance, an American void where little is sacred and little is profane and the dominant reaction to life is what Joey does now, looking at Lindsey. He shrugs.

For several weeks, Dylann Roof slept on the floor here. He played video games. According to the Meeks, he showed off his new Glock .45-caliber handgun, drank heavily and retreated to his car to listen to opera. And sometimes he confided in his childhood friend Joey, who wasn’t the type to ask questions….

Of course, as a journalist, I want to know how reporter Stephanie McCrummen and photographer Michael Williamson gained and maintained this sort of relationship with the subjects. What did they tell Kim Konzny, her three sons and the others in the trailer to explain why they were there and what they wanted? How, for instance, were they able to report from inside Ms. Konzny’s room where she goes and closes the door to shut out the chaos in her trailer? Seems like that would have been the very toughest line of all to cross.

What sort of relationship do you form with people to get this kind of access when your eventual product will be something headlined “An American Void?” Did the subjects ask on the front end for any assurances as to how they’d be portrayed, or did they just shrug? And if they did ask, how frank were the journalists about the impressions they were forming?

There’s something almost Faulknerian about this story, only without the long sentences. And Faulkner didn’t actually have to get to know the Snopeses. Nor, I’m guessing, did Erskine Caldwell have to hang out with Ty Ty Walden et al. to write God’s Little Acre. Real people are tougher to deal with…