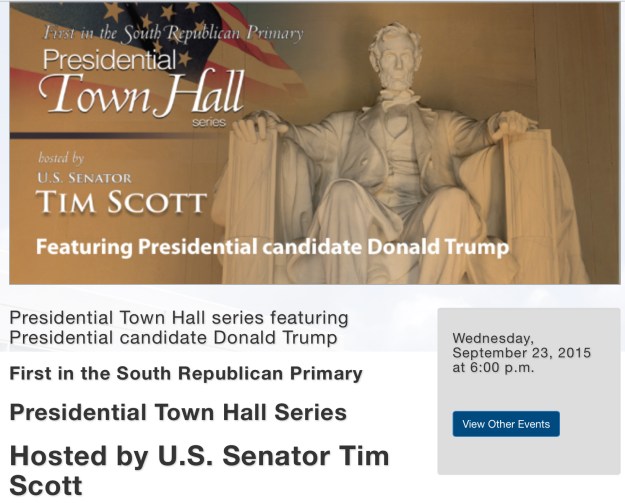 Someone shared with me this link to publicity about an event, and I was immediately struck by how grossly inappropriate it is to juxtapose a photograph of the Lincoln monument with the name “Donald Trump.” And yet there it is, imposed right across Honest Abe’s left shin.

Yeah, I get it. Someone seeking the Republican presidential nomination, and the first Republican nominee to be elected president. On a very literal, superficial level, I can see how that might make sense to somebody.

But, having watched (most of) the first episode of Ken Burns’ “The Civil War” again last night, I am particularly mindful at this moment of Lincoln’s stature as the most careful, thoughtful and profound speaker in our history. He was always careful to say exactly the right thing at the precise moment when it would have maximum effect in moving the nation toward emancipation and reconciliation. Not a word was out of place or ill-timed. He said exactly what needed to be said, for the good of the nation, at exactly the moment when it needed to be said.

He was always about appealing to “the better angels of our nature.” And he succeeded amazingly, at the moment in our history when we were most divided.

And then there’s Donald Trump, who is the opposite of all that. He’s the one person in public life that we can depend on to say precisely the wrong thing (if you define right and wrong according to Lincoln’s priorities of national unity and preservation) whenever he bloody well feels like it.

Putting them together this way is… jarring.

17 thoughts on “Lincoln and Trump: Does it get more incongruous than that?”