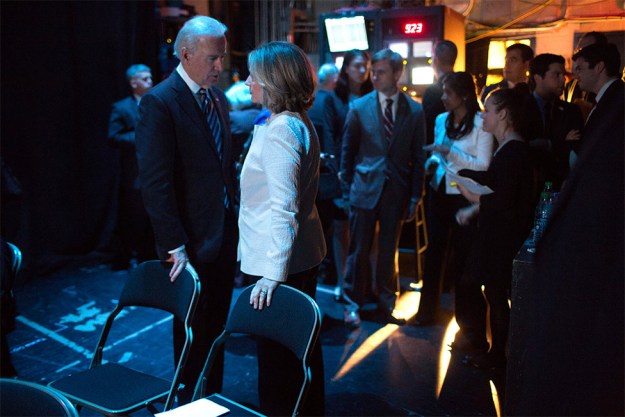 Generally, I’ve been happy, even a little excited, to hear that Joe Biden might challenge Hillary Clinton for the Democratic presidential nomination.

Part of it is the unsavory side of the presumed front-runner that her email mess reveals, day after day. Actually, not so much “reveals” as “reminds us of.” We are reminded of the control freak, the Nixonian figure who can’t see legitimate criticism as anything other than another attempt by her enemies in the “vast right-wing conspiracy” to trump up a way to do her in.

Whereas I’ve always liked Joe. He was my fave on the Democratic side in the 2008 campaign until he dropped out. It’s hard not to like Biden; he’s just so chock-full of the best kind of Joe-ness. (What is Joe-ness? Oh, it’s many things. One example: Earlier this morning I was talking to Samuel Tenenbaum, and told him to say hi to Inez and tell her I want to talk with her about Biden. That caused Samuel to tell me about Biden calling him to wish him a happy birthday a couple of weeks back. They got to talking about books they had read recently. Samuel, who loves to share books with friends, mentioned he had wanted to send a book to the veep but couldn’t get past his staff. According to Samuel, Biden said, “My staff and the Secret Service can be a pain in the ass.” That’s one type of Joe-ness.)

However it turns out, I’ll be happy to see him get into it, if he does.

But… all of that said, I read a column this morning in The State that reminds me of at least one reason I might prefer Hillary as a commander-in-chief.

It was by Doyle McManus of the L.A. Times. In part, it said:

Clinton was on the hawkish side of Obama’s team. She supported a big surge of U.S. troops into Afghanistan in 2009; Obama opted for a smaller surge, with a time limit. In 2011, she called for U.S. military intervention in Libya; Obama went along. In 2012, she urged him to send military aid to Syrian rebels; Obama resisted (after Clinton left office, he changed his mind).

Biden was on the opposite end of all three debates. He didn’t think adding U.S. military force in Afghanistan would solve the country’s problems. He didn’t think Libya was central enough to U.S. interests to justify airstrikes. And he was skeptical about the idea of arming Syrian rebels.

The two even disagreed over whether the president should launch the secret 2011 raid in Pakistan that killed Al Qaeda leader Osama bin Laden. Clinton “concluded that this was a rare opportunity and believed we should seize it,” then-CIA Director Leon Panetta wrote in his memoir. “Biden argued that we still did not have enough confidence that Bin Laden was in the compound [where the CIA believed he was living], and he came out firmly in favor of waiting for more information.”

There’s a clear pattern here. Each time, Clinton argued in favor of U.S. intervention. Each time, Biden was a skeptic, warning Obama that the risks outweighed the potential gains….

This piece reminds me that one of the thing I’ve always liked about Hillary is that she is on “the hawkish side of Obama’s team.” It’s not that I’m such a hawk, as many of you believe. It’s just that I’m definitely, without question, to the hawkish side of the current POTUS. More than that, she understands America’s role in the world, that the United States is, as Madeleine Albright used to say, “the indispensable nation.”

And Joe even tried to put the brakes on the Abbottabad operation? OK, it wasn’t unreasonable to want to be more certain about Osama bin Laden being in that compound. Anyone would. Certainty is a nice thing to have. But as it turned out, Obama made the right call in going ahead, and it stands as one of the wisest decisions of his presidency.

So where do we stand here? Definitely, I prefer Joe on a personal level — he passes the “would you want to have a beer with him” test with flying colors. But there’s a lot to be said for Hillary’s approach to national and collective security — which is, you know, kinda important when picking a POTUS. 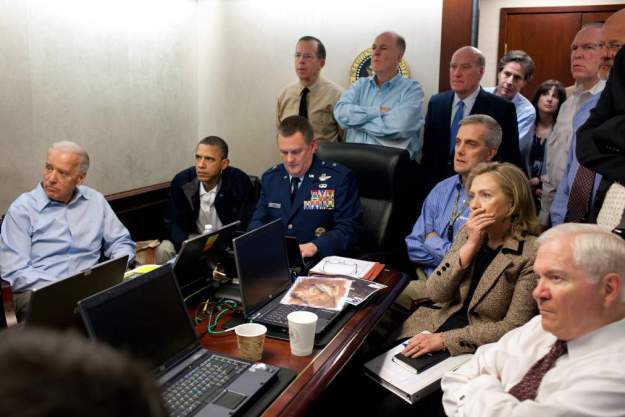 The bin Laden mission: Biden was the cautious one.

17 thoughts on “OK, there’s ONE reason I might prefer Hillary to Joe Biden”