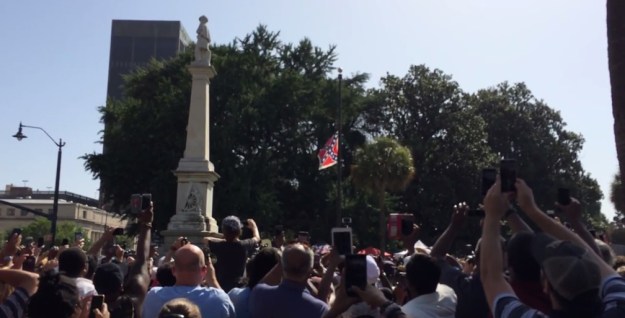 THE moment — the flag starts coming down.

In case you had a creeping feeling at the back of your mind that were it not for the fact that we are, thank God, a republic instead of a direct democracy, the Confederate flag would still be flying…

I offer this reassuring news:

Two-thirds of South Carolinians agreed with the General Assembly’s decision in removing the Confederate flag from the State House grounds this summer after the Charleston church shootings, a Winthrop University poll released Wednesday found.

Less than a year ago, just one-third of South Carolinians thought the Civil War icon should come down after flying at the state’s most prominent public building for five decades.

That was before an African-American pastor, who also was a state senator, and eight of his parishioners were gunned down at Emanuel AME Church in Charleston in June. Authorities brought hate crime charges against the accused killer, who is white.

Slightly more than half of white respondents thought lawmakers made the right decision in taking down the Confederate flag, the Winthrop survey found. More than nine in 10 African-Americans backed the decision….

At least, I find it reassuring to know that, while I still praise our elected officials (starting with Nikki Haley) for courage and leadership in bringing the flag down without waiting around for polls, even if they had, the result would have been the same.

So South Carolina really has grown up, finally, and put the flag behind it.

That is wonderful news.