Jeb Bush — the guy who would normally win in South Carolina — at a campaign event in Columbia in August.

South Carolinians who are not Republicans know their vote in the general election for president doesn’t count for much; our state’s electoral votes will go to the Republican.

But at least, thanks to our open primaries, we all get a say in which Republican is on the ballot in November. And since 1980, South Carolina has always picked the eventual winner, nudging the party toward a candidate who might get some of us independents, and maybe even a few Democrats, to vote for him.

That is, we always did until 2012. But that was a one-time fit of craziness, right?

Apparently not. And as much as I have dreaded saying it, The Washington Post has no such qualms. This story on today’s front page paints a portrait of a state that is throwing its national influence away:

Much like in Washington, where the abrupt withdrawal from the speaker’s race of Majority Leader Kevin McCarthy (Calif.) signaled total party chaos, the view is fading that, eventually, this presidential contest will get back to normal.

Support for former Florida governor Jeb Bush, who recently called South Carolina a “lock,” is at 5.7 percent here, according to theRealClearPolitics average. That’s good enough for only fifth place, 28 points behind front-runner Donald Trump and 12 behind former neurosurgeon Ben Carson. Four years ago, on his way to losing the state’s primary, former Massachusetts governor Mitt Romney never polled lower than 13 percent. Sen. Marco Rubio (Fla.), another establishment favorite who is ahead of Bush nationally and rising in recent polls, is currently even further behind in South Carolina, with a RealClearPolitics average of just 5 percent.

“The pattern of crowning the nominee has been broken,” said Barry Wynn, a former South Carolina GOP chairman whose office is festooned with Bush memorabilia, down to a “I Miss W” coffee mug….

A big part of the problem is the lack of GOP leadership to pull the party together around a candidate who can win. Once, that sort of leadership was provided by Carroll Campbell. Now, Nikki Haley seems uninterested, and Lindsey Graham is muddying the waters with his own quixotic campaign, which has sucked up name support that might have automatically gone to someone like Jeb Bush.

Meanwhile, when it comes to tearing the party apart, most of the state’s congressional delegation is a big part of the problem, and it’s hard to imagine them ever being part of a solution.

After the 1988 primary, when my reporter was having trouble coming up with a lede for a story summing up the results, I suggested he write, “Now we know what it feels like to be an Iowan.” It was plain that we, too, had become a state with outsized influence on the GOP nomination process.

We may not be feeling that feeling much longer, if this trend continues. And I, for one, will miss getting that early close look at the candidates. 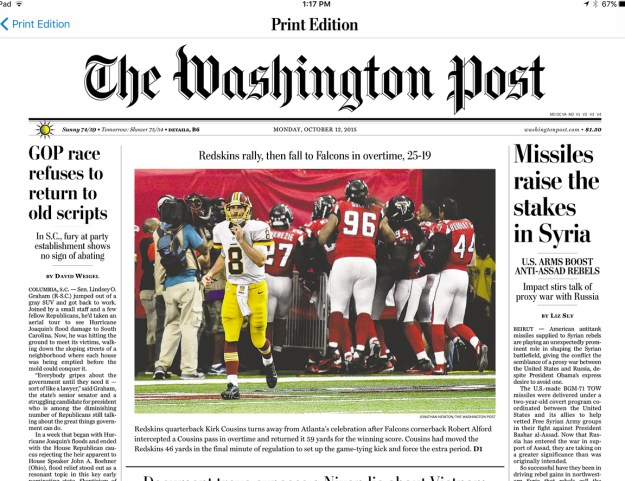 22 thoughts on “Crazy SC GOP is throwing it all away”