The gay man who got a surprise call from the pope: “I would like to give you a hug” http://t.co/6XMEF87fzt

And now today, folks are making a fuss over this story:

Pope Francis met with a friend who is gay, and his partner, while in D.C.

A longtime friend of Pope Francis who is openly gay said Friday that he and his partner met with the pontiff during his recent trip to Washington, adding a new layer of fodder for Americans who are riveted by this pope and are scrutinizing his words and actions for affirmation of their own views….

Earlier, everyone was going on about the Pope meeting with the Kentucky clerk who didn’t want to sign off on same-sex marriages. Like that meant something. Even though the Vatican says it didn’t:

While conservative opponents of same-sex marriage have hailed the Francis-Davis meeting as validation of their cause, the Vatican said Friday that the encounter was not meant as an endorsement of all of Davis’s actions and views.

“The Pope did not enter into the details of the situation of Mrs. Davis, and his meeting with her should not be considered a form of support of her position in all of its particular and complex aspects,” a Vatican statement said….

Face it, the guy likes people. He meets with them. From old friends to fallen-away Catholics such as Kim Davis.

That said, while I fully understand why the pontiff wanted to hug his gay friend, I don’t know why he met with Kim Davis as opposed to the millions of other people he could have had short private meetings with. Perhaps, as some conspiracy theorists have it, he was duped into it. Although I doubt that. This pope doesn’t do what he doesn’t want to do.

And he likes people. Including people you, or I, would rather he not meet with.

Personally, I was a little disappointed that he met with Ms. Davis, and not exactly for the same reasons that those who think people who oppose same-sex marriage are “haters” were. Every gesture makes a point (and this Pope is a genius of gestures and what they communicate), and any useful point to have been made by meeting with the clerk — re religious freedom — was made far more effectively and appropriately in his meeting with the Little Sisters of the Poor.

The Little Sisters are clearly in the right in their assertion of religious freedom — speaking from a Catholic perspective. And you know, while a lot of people who want him to be something else tend to forget it, the Pope is Catholic. They are a private, religious entity that the government is trying to force to do something against their beliefs.

Kim Davis, by contrast, is an elected public employee, with an obligation to perform her duties in complete accordance with the law as it exists, not as she would wish it to be. If she wishes to avoid conflict with her conscience, she can resign her public office. Big difference between that and being a private actor, like night and day.

Although it occurs to me that the difference between public and private, so obvious to those of us who live with and embrace the 1st Amendment, may not seem quite as stark to an Argentine of Italian abstraction. I don’t know. In any case, if he did meet with Ms. Davis to make a point, it likely would have been more about standing up for your principles than about same-sex unions or even contraception.

(Although, that said, his willingness to meet with dissidents here, in a free country, makes it seem even worse that he didn’t meet with Cuban dissidents in that oppressive country. I have a theory about that: He’s trying hard to open up Cuba to the Gospel, and doesn’t want to push too hard while the Castros are being so welcoming. The stakes are higher there, and gestures can have more severe consequences, especially upon those very dissidents, once the Pope leaves. He was, after all, a guest in both countries — and this country is infinitely more tolerant of in-your-face political gestures than Cuba is.)

Anyway, people shouldn’t overreact to these things. We get these extremes. The Pope meets with Kim Davis, and they’re all like, “He hates gay people!” Instead of concluding that, unlike a lot of people, he just doesn’t hate Kim Davis.

Then he meets with his gay friend, and they’re like, “He loves gay people!”

Well, of course he does. He always has, and always will. He’s that kind of guy. He loves everybody… 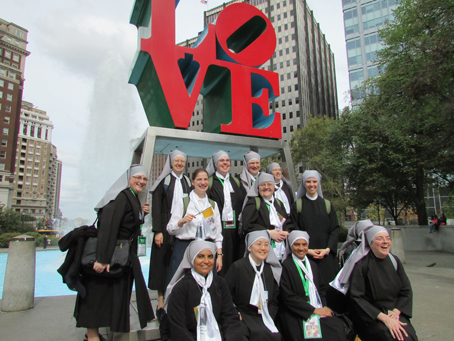 The Little Sisters of the Poor are all about love, too.

3 thoughts on “Face it: The Pope is an equal-opportunity meeter”